A DAMNING report by Human Rights Watch has blasted Spain’s treatment of migrants.

The study, published today, claims asylum seekers and other migrants arriving by sea to Spanish shores are held in poor conditions and ‘face obstacles in applying for asylum’.

“They are held for days in dark, dank cells in police stations and almost certainly will then automatically be placed in longer-term immigration detention facilities pending deportation that may never happen,” the report reads.

Malaga’s facilities in particular, according to the report, have substandard conditions.

“Málaga’s central police station has underground jail cells, which are in particularly poor condition,” it reads.

“There is no natural light or ventilation, and during the visit the stench in the enclosed, dank space was overpowering… these cells are wholly unsuitable for even short periods.”

Additionally, in Almeria, Motril and Malaga, the human rights body said they found authorities to be actively discouraging applications for asylum.

“Migrants detained told Human Rights Watch that they did not have individual meetings with a lawyer in police custody and were given little or no information about applying for asylum,” it claims. 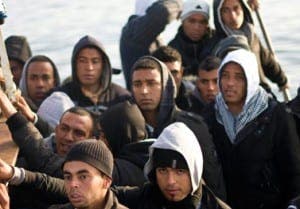 “Human Rights Watch has documented in the Spanish enclaves of Ceuta and Melilla what appears to be a policy to discourage asylum applications. Despite a significant increase in asylum applications in Spain over the past few years, in 2016 the country received just 1.3% of all new applications filed in the 28 EU member states, and has a low per capita rate.

“Within the permitted 72 hours of detention, the police must fingerprint and interview all migrants, issue a return order, and take the migrants before a judge to confirm or dismiss the order and to make a custody decision. At these hearings in Motril and Almería, judges routinely conduct group interviews, including via teleconferencing, asking detained migrants pro forma questions before sending virtually all adults to immigration detention pending deportation.

“Detention for the purpose of deportation should only be ordered where there is a likelihood that deportation can and will be carried out reasonably promptly, with due diligence. However, according to the Defensor del Pueblo, Spain’s human rights institute, only 29% of those detained in these facilities in 2016 were actually deported that year.”