FANS of hit fantasy series Game of Thrones are all too familiar with the show’s newest filming location.

The current seventh season sees Daenerys Targaryen return to Dragonstone, the abandoned castle where she was born that was once the ancestral home of House Targaryen.

The castle itself may be a CGI masterpiece, but the beautiful setting where the show films is completely real and FREE to visit in Spain. 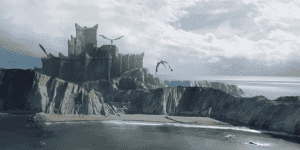 Located near Bermeo, in the Basque region, the site is known as San Juan de Gaztelugatxe and was originally built as a religious hermitage by the Knights Templar in the ninth century.

A modest church rests at the top of the island, and is accessible only by a narrow set of stairs that bridge the island to Spain’s mainland.

While the monument and staircase never close to the public, getting there can prove difficult.

The site is about an hour and a half drive from the closest town while the trek up the mountain is far from easy.

The path is straightforward, but it is a steep hike and not recommended for anyone not in good physical condition.