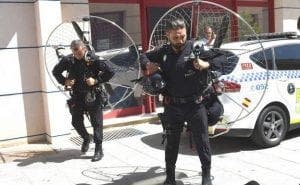 It comes after the AENA, the State Agency for Aviation Safety (AESA) and the ministry of development gave the Costa del Sol town the green light to launch its flying policeman in the area.

According to La Opinion de Malaga, the small unit will initially be made up of two policia local agents, who are both trained to fly with the motor on their back.

The motors allow the cops to fly for five hours, using around 3.2 litres of fuel per hour.

They can reach speeds of 45km/hr.

“It is a tool that has been successfully used by police officers in other countries and is very suitable for a municipality like ours, with 27 kilometers of coastline, because it allows services from the air to a height between 150 and 300 meters”, said Security councillor Javier Porcuna.

The ‘drone cops’ will scan the skies for emergencies, for example locating people lost on the mountain or at sea.

They will also be able to monitor landfill sites and urban planning sites for any potential irregularities.