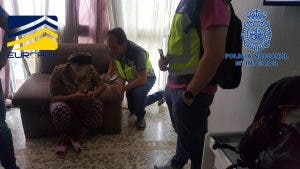 POLICIA Nacional have busted an international sex trafficking ring operating out of Malaga and Benidorm.

Some 25 people were arrested yesterday, including a woman in Madrid, the suspected ringleader in Helsinki and two suspected traffickers in Barcelona.

Some 16 trafficked women were freed in the operation, which was carried out in conjunction with Finnish police.

The ring also operated in Nigeria, Niger, Libya and Italy, and was present at every stage of the journey of the trafficked sex slaves, including recruitment, transfers and accommodation.

The investigation began when agents of the Madrid Asylum and Refuge Office detected two young Nigerian women suspected of being victims of trafficking.

A serious investigation was immediately launched.

Cops soon discovered the network had a their base in Nigeria, where most of the victims were captured.

Most were young women in the most disadvantaged areas and who were in desperate situations.

The victims were forced to submit to various voodoo rituals to ‘ensure their absolute fidelity’.

They then travelled along with other members of the organization to Niger.

From there they were transferred to Libya and left under the charge of a man, who was in charge of controlling them until they embarked for Italy, where they risked their lives by traveling on boats that were excessively loaded and lacking any safety measures.

Once in Italy, they were placed in immigrant shelters, where they waited for new instructions.

It was here that the organization had a network of apartments, where they housed the victims after removing them from the reception centers.

One of the main people in charge of the network, settled in Italy, was in charge of this task, removing the girls from the centers and taking them to one of the apartments, where they were under their control until they travelled to Spain.

They were transferred to Madrid as soon as possible so they could apply for international protection and work for the organization without problems in case they were approached by police.

A man in Madrid produced fraudulent documentation to request asylum and lodged them while they were in the capital.

The victims were then transferred to Malaga and Benidorm, where they stayed in apartments along with other members of the organization.

These gang members were responsible for initiating and then maintaining the women in the exercise of prostitution, always under their complete control.

Women were forced to perform sexual services every day for most of the day, providing the network with lots of cash income.

The funds were channeled to Nigeria, where they were used to finance new episodes of recruitment and transfers of victims, which in turn increased profits.

To make the investment even more profitable, the victims were transferred to other locations such as Gandia or Soria where they were also required to practice prostitution in alternative clubs.

Cristina Hodgson - 9 Dec, 2022 @ 08:45
AEMET, the State Meteorological Agency, has upgraded the weather warning to orange alert, in place due to torrential rain forecast throughout the whole province,...