Huge crowds have answered calls from referendum organizers and turned up hours before voting is set to start to protect remaining polling stations.

Local radio have reported that hundreds of thousands of Catalans have flooded the streets this morning in support of the referendum.

Some estimates suggest up to half a million people have incredibly taken to the streets.

People have been turning up since 5am to wait outside polling booths with voting not set to open until 9am this morning.

Euphoric crowds have been chanting Votarem – we will vote – and singing as the official ballot boxes have been passed through the crowds.

You can watch these phenomenal developments here.

This was the scene at 5am, four hours before the polls were set to open in lJesuites de Casp.

Further footage from 7am across Barcelona shows determined Catalans gathering in large crowds outside polling booths to refuse the police entry.

Guillem de Sanctis, 46, who participated in the sit-in at lJesuites de Casp was overwhelmed by the public support.

“Your support is so encouraging to us right now.

“Most of us have spent several days now in schools all over Catalonia to keep the stations open for you.

“We can see you from inside and we are so excited to vote.”

Police had initially ordered that polling stations must close by 6am but it appears that the strength in numbers of local people have prevented them from shutting down remaining polling stations.

The Olive Press will keep you updated with further developments as they happen. 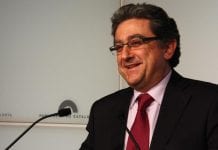