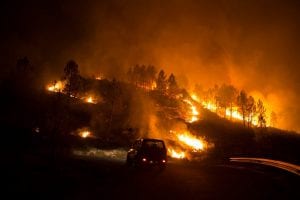 AT least 34 people have died due to the devastating forest fires in Portugal and Spain.

Several people are still missing in Portugal, including a one-month old baby, while two victims in Galicia, Spain, burned to death in their car.

Thousands of firefighters are still tackling flames, which erupted across north-eastern Portugal and parts of Spain over the weekend after a hot dry summer and an unusually warm October.

Strong winds from Hurrican Ophelia are believed to have helped spread the fires.

Rain is forecast for the affected regions later today but it’s not clear how much that will aid efforts.

In Portugal, a state of emergency was declared north of the Tagus river as more than 6,000 firefighters in 1,800 vehicles were deployed this morning.

Meanwhile, Galician leader Alberto Nunez Feijoo claimed the fires were deliberately set by arsonists, in what he called ‘terrorist acts’.

Interior Minister Juan Ignacio Zoido said several people had already been identified in connection with the fires, and appealed for anyone with further information to share it with the national protection service.

Prime Minister Mariano Rajoy is travelling to Galicia and has expressed solidarity with the victims.