DOLPHINS found dead off the Spanish coast ‘had Alzheimer’s’.

Scientists from the Universities of St Andrews, Edinburgh, Florida and Oxford, concluded that the dolphins shared the same proteins found in human patients with dementia in the journal Alzheimer’s and Dementia.

This is the first study to show the disease in a wild animal as it was previously thought that Alzheimer’s only existed in humans.

“This is the first time anyone has found such clear evidence of the protein plaques and tangles associated with Alzheimer’s Disease in the brain of a wild animal.”

The discovery adds to another feature humans share with dolphins after it was revealed that both species can survive long after their prime age for reproduction. 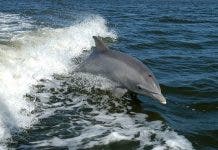