THIS is the moment a taxi driver in Spain appears to snort cocaine as he drives along a motorway.

The man was filmed snorting the white powder up his nose before passing the Class A substance to his male passenger, who immediately passes it back to a third person in the back of the vehicle.

As the driver inhales the drug, the unidentified man on the back seat says: “That’s it, that’s it, right up.”

El Mundo, which published the 15-second video online, claims it was shot on the motorway leading from Madrid’s international airport to the city centre.

The national newspaper said police have identified the driver and will question him ‘in the next few days.’

It is not known how the video ended up in the hands of police. 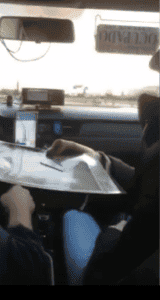 One taxi driver who flagged up the footage on social media said: “It looks like he’s already been caught. Now let him pay for what he did.”

George Mathias - 20 May, 2022 @ 17:00
YOU’VE survived Valderrama and hacked around Wentworth…but have you tested yourself at Romano Hills? A stunning new 18-hole challenge awaits talented golfers in the hills,...