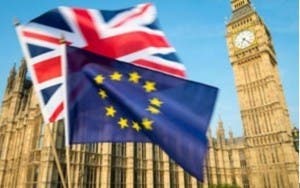 THE British public are more divided than ever.

And nowhere is this more apparent than in the Brexit debate, which has divided families and opinion across the nation.

And thanks to a series of YouGov surveys, the divide between the Remain and Leave camp has been made even more clearer…

Nearly a quarter of leave voters (23%) have their steaks well done, compared with only 12% of remain voters. Remain voters prefer medium rare.

Surveyed in April about eating meat, 24% of leave voters said they were ‘very unwilling’ to consider ‘eating less meat and fewer meat products in the future’. Only 9% of remain voters felt so strongly carnivorous.

Leavers are less likely to have watched PMQs

In February 2017, YouGov garnered reactions to the PM’s performance at Prime Minister’s Questions. Over half of leave voters, 57%, claimed to have never seen it or any clips of it. Remain voters were slightly more likely to have witnessed the spectacle, although 46% of them still said they hadn’t, raising questions about the impact of PMQs on public opinion.

A massive 72% of Leave voters said they would support ‘a law against wearing a full body and face veil’ aimed at Muslim women. Only 32% of remain voters felt the same way.

Asked ‘Do you think it is or is not acceptable to sell or display a golliwog doll?’, 71% of leave voters said ‘acceptable’, while only 37% of Remain voters felt the same way.

Professor of politics at Queen Mary University of London Tim Bale, who commissioned this particular piece of research, said: “The remain/leave split, to be honest, was pretty much what I expected. Research shows that age, identity and values – as opposed to, say, economics – played a big part in which way people voted, and they’re also exactly what drives what people think about gollies.”

Asked on the weekend of his inauguration if they thought Trump would be a good president of the US, 30% of leave voters said they believed he would.

A big fat 0% of remain voters said they thought Trump would be a ‘great’ president. Only 3% said he would be ‘good’.

More than a quarter of Leavers (26%) want out of the climate change agreement, compare to only 5% of remain voters.

A massive 41% of Leavers want to quit the Eurovision song contest.

Some 71% of leave voters believe ‘Gibraltar should remain a self-governing territory’ while just over half of remain voters, 54%, share this view.

Additionally, asked: “If the status of Gibraltar was the only thing preventing the UK from getting a much better Brexit deal, would you support passing at least some sovereignty over the territory to Spain?” 48% of leave voters said they would prefer the worse deal.

Leave voters are keener to impose harsher time limits on abortions, or ban them altogether

In September 2015 Conservative party members were polled on abortion and their Brexit voting intentions. Even within this small sample, there was a large difference between leave and remain voters.

There was a lead (30% to 25%) among leave voters in preferring there to be a reduction in the abortion time limit, to below 24 weeks. And twice as many leave-voting Tories (8%) as remain-voting Tories (4%) wanted to see a total ban on abortions.

Leavers think the BBC should be privatised

Brits who voted to leave the EU are twice as likely (32%) as remain voters to think the BBC should be privatised.

Asked ‘personally speaking, do you think gay sex is or is not natural?’ just under a half of leave voters – 47% – say they believe gay sex is unnatural. And some 21% of remain voters agree with them.

They are more likely to think being gay is a choice

When asked ‘what makes people gay?’, less than half of leave voters said they were born that way. Some 35% of leavers agreed with the statement: “Being gay or lesbian is just the way some people choose to live,” compared with 28% of remain voters.