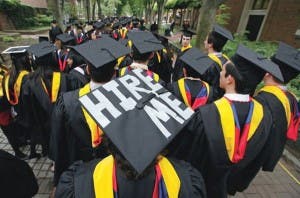 BREXIT has been blamed for a drop in Europeans applying for British university places.

The number of students coming to the UK from the EU has fallen for the first time in five years.

Figures published by the university admissions service Ucas show that EU applicants dropped by 4.4% to 51,185 – some 2,375 applicants fewer than in 2016 – reversing a trend of year-on-year rises since 2012.

The number of acceptances from the EU also fell by 2.1% this year.

Alistair Jarvis, chief executive of Universities UK, said: “The small fall in EU students suggest that Brexit is starting to deter EU students from coming to the UK.”

He called on the government to minimise barriers and bureaucracy for students post-Brexit and continue to provide financial support for EU students applying for 2019 entry.
Ministers have pledged that EU students starting courses next autumn, the 2018/19 academic year, will still be eligible for government tuition fee loans.

Universities Minister Jo Johnson said: “A key part of the success of British universities is attracting talent from across the globe. EU students make an important contribution to our universities and we want that to continue.”

International students pay significantly higher fees for courses than their UK/EU counterparts, but the number of overseas applicants applying for, and being accepted onto, degree courses at UK universities continues to increase.

The report shows that the number of applicants applying from outside the EU to start undergraduate courses this autumn, rose by 2.8 per cent to 76,380, the highest on record.

The numbers of overseas students accepted on to degree courses also rose by 5 per cent.
A spokesman for Ucas said: “The number of applicants from the EU in 2017 is the second highest on record. However, this is a decrease of 4.4 per cent from 2016. This may be related to the uncertainty around the UK’s withdrawal from the EU.”

Applications from UK students also fell, for the second year running, with 3.1% fewer applying to start courses this autumn, and there were also 2,535 fewer acceptances from the UK.
Fees in England climbed to £9,250 this year, and the interest charges on student loans have also risen from 4.6% to to 6.1%.