2017 has not been the best year for low-cost travel.

The Ryanair mass cancellation debacle and the collapse of Monarch sent prices soaring as remaining heavyweights took adavantage of the lack of competition.

As Ryanair gets itself back together, there will be more deals to be had in the coming months, but you will have to be on the ball to get the best bargains.

Ryanair launches major flight sales every couple of months, but you will need to know when they start and react fast if you want to grab tickets to Spain and beyond for as low as €6 one way.

The cheapest time to book is in January with the airline’s sale starting in the middle of January.

It should last for approximately two weeks.

Prices change during that time and booking on weekends might be slightly more expensive.

You will find it is best to book during the week.

Ryanair’s Fare Finder handy tool can show you where you can go for a set budget and from your chosen departure airport.

But you can’t choose a date — the results show you the month you can get flights for within your set budget — so it’ll only work out if you’re flexible.

Ryanair is selling flights to destinations in 33 countries. 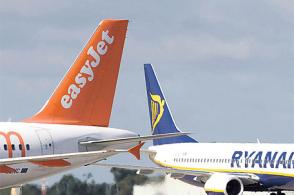 To make sure you’re one of the first to, it’s a good idea to subscribe to the airline’s marketing emails to be the first to know about their deals.

The budget airline’s fares are cheapest when you book early, so get in fast to get the best deals.

Always compare against the best alternatives using Skyscanner when you’re looking to bag a bargain flight.

Easyjet operates flights to destinations in over 30 countries.