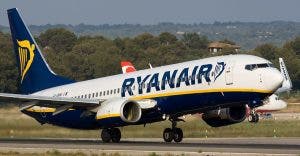 A RYANAIR flight from southern Spain has been forced to make an unscheduled stop in San Sebastian to dump a ‘drunk’ Irish couple.

The FR7063 flight from Alicante to Dublin was diverted to Santander yesterday morning.

Police were called to meet the aircraft after the pair, in their 50s, became ‘aggressive’ mid-flight.

The rowdy couple are now facing a hefty fine for breaching air security after Guardia Civil officers took them off the flight.

Witnesses have said the couple had had ‘a lot to drink’ and were arguing violently with each other but were not targeting other passengers.

The incident happened about a third of the way through the three-hour flight from the Costa Blanca capital on Wednesday.

The pilot made an unscheduled landing just before 4pm at Seve Ballesteros-Santander Airport.

The flight took off at around 5pm after the ‘disruptive’ passengers left the plane.

They were said to have left the aircraft of their own accord.

A spokesman for the Guardia Civil in Cantabria confirmed an Irish couple had been removed from the plane.

He said: “The pilot asked us to attend because he didn’t want two people who were on the plane and being aggressive to continue their journey.

“The couple left the aircraft voluntarily after we went on board and did not have to be removed by force.

“Their personal details were recorded and they were informed they were being reported for breaching air security.

“They won’t face any criminal charges but are likely to receive a fine from AESA, the state body that will now move things forward.

“I cannot comment on what happened in the plane because it wasn’t something the Civil Guard witnessed. The message from the plane was that they were being aggressive.”