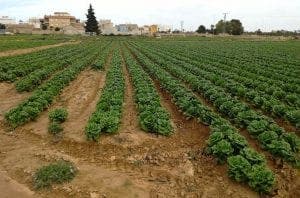 FARMERS in southern Spain fear they may lose their position as the top exporters in Europe after successive hot and dry seasons.

It comes after AEMET revealed last year was the hottest and one of the driest on record, and after climate groups warned of 70% desertification of Spain in global warming is not addressed immediately.

“This year we are seeing what we already feared,” said Jesús Abenza, commercial director of the Murcia-based cooperative Alimer.

“In order to maintain their production volumes this season to be able to meet the current demand, the producers of leafy vegetables, broccoli and cauliflower from Murcia and Alicante have sought new growing areas to ensure a stable water supply.

“However, these are located at higher altitudes than Murcia, which entails other risks in autumn and winter, such as excessive cold, with frosts at specific times or excessive winds. As a result, the stability in the production and the strict compliance of supply programs may be jeopardised, causing prices to fluctuate more sharply.”

Plantings have also been carried out in areas of Sevilla, La Rioja, Navarre and Tarragona and elsewhere.

“It is not a solution to the water shortages, but we don’t have any other alternative if we want to maintain our business,” added Abenza, “If we found out that Seville was an ideal area for the cultivation of broccoli and lettuce, we would have already been doing it for a long time.”

“It is very difficult to build commercial business relationships with customers as we had been doing in recent years, and yet it is very easy for them to switch to other origins if there are problems with the supply,” he adds. “At the moment, the situation continues to be one of absolute uncertainty. We don’t know how the campaign is going to develop in the coming months.”