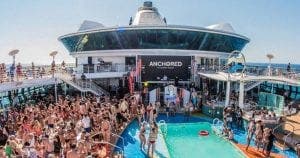 A NAUTICAL, sexed-up version of Coach Trip is set to hit our small screens soon.

Channel 4 bosses have traded dry land and buses for the Mediterranean sea and luxury, party cruises.

New reality show, Shipmates, will see two teams of friends jetting off to the Med to join over 2,500 other boozed-up twenty somethings for the ultimate party extravaganza.

Across the five-part series, the glam groups will compete in a serious of rigorous challenges.

But a shock twist at the end of the show will see the real winners voted for by other passengers on board, who will choose their favourite team.

Commissioning Editor for Factual Entertainment at C4, Becky Cadman, said: “We’re excited to be working with Midlands indie Full Fat TV on a series that’s guaranteed to be full of sun, sea and sass.”

The official air date is yet to be confirmed.