AN Andalucian who was ‘raised by wolves’ has said he is disappointed by life in the human world.

Marcos Rodríguez Pantoja, from Córdoba, suffered abuse from his father and stepmother after his mother died when he was three.

He was sold to a goat herder who lived alone in the mountains of the Sierra Morena, but the man died or disappeared when Pantoja was only aged seven.

The Cordoban claims he was then ‘adopted by a pack of wolves’ who took him in as one of their own.

He would play with cubs and was cared for by a female wolf.

Pantoja was an official member of the pack and slept in a cave and lived off berries and mushrooms. 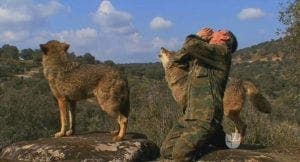 He told El Pais how his time with the wolves was the happiest and most free of his life.

“I only wrapped my feet up when they hurt because of the snow,” he said.

“I had such big calluses on my feet that kicking a rock was like kicking a ball.”

He was discovered by police when he was aged 19.

He grunted and growled at them, having long stopped using words to communicate.

He was captured and forced to return to civilisation, while his life has been the subject of anthropological studies, books and even a film – 2010’s Entrelobos (Among Wolves).

But at 72, Pantoja says living with humans is much more difficult than with wolves.

While he has held jobs in hospitality and construction, he has felt cheated and exploited by his bosses.

A green group is now crowdfunding to help pay for his village house to have insulation, while he gives talks at schools about animal welfare and the environment.

Pantoja said he feels more comfortable with children than with adults.

He has tried to return to the mountains he once called home, but says it’s ‘not what it used to be’ because the wolves no longer see him as their brother.

“There are wolves and if I call out to them they are going to respond, but they are not going to approach me.”