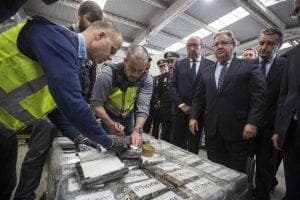 THE biggest ever shipment of cocaine found entering Europe has been seized in Algeciras.

And one of the arrested is reportedly an officer in the Guardia Civil.

Nearly nine tonnes of the drug were hidden in a boat transporting bananas from Colombia, which was intercepted by the Guardia Civil at the Bay of Gibraltar Port.

Six suspects have been arrested for their involvement in the drug trafficking ring – four in Spain and two in France.

Hidden in 1,080 boxes of bananas, officials found a whopping 8,740 tonnes of cocaine, which is said to be worth hundreds of millions of euros.

Spain’s interior minister, Juan Ignacio Zoido, announced: “It is the biggest seizure of cocaine in a container made so far in Europe.”

It comes after an international investigation carried out by the Colombian government and Europol.

Following the drug haul, researchers were led to an industrial warehouse in Malaga where the illegal operation was being carried out.

The Colombian government said the shipment belonged to the notorious Gulf Clan, the country’s most powerful drug trafficking group.