IT is the trial that has outraged the nation and painfully re-opened old wounds for countless women who have suffered at the hands of sexual abuse.

Now, in a bid to show solidarity with the victim of the ‘wolf pack’ gang rape attack, thousands of women in Spain are sharing their heartbreaking personal experiences by using the hashtag #Cuéntalo (Tell it).

It comes after last week’s highly controversial ruling by a court, which cleared five men of the crime of rape for a lesser charge, after they allegedly took turns to rape and film an 18-year-old girl at Pamplona’s San Fermin (Running of the Bulls festival) in 2016.

Since the lenient verdict, protesters have flooded the streets of Spain to express their fury, re-igniting the global #MeToo movement.

Using the hashtag, women across Spain and Latin America tell the tragic stories of rape, murder, domestic violence, sexual harassment and incest – not only for themselves but also on behalf of victims who no longer can.

‘Her mummy had a boyfriend. Her mummy was taking a shower when her boyfriend walked into her room while she was playing with her toys. He locked the door. He took advantage of that little five-year-old girl. That girl was me. He still walks free. #cuéntalo’.

‘I am 26 years old, I am six months pregnant. Previously I suffered domestic violence at the hands of my partner. One night my partner became aggressive because of an argument we had, he grabbed a gun and shot me.

‘I am telling this for MY SISTER TATIANA WHO NO LONGER CAN #Cuentalo’.

‘Reading every #cuentalo has given me goosebumps and because of this, it has encouraged me to tell mine.

‘From just seven years old I was abused by a relative until I was nearly 14.

‘Living with this memory is eating me up inside, it’s so horrible and it’s something that I can’t cure with anything in this life’.

A recent study by Metroscopia revealed that 32% of women in Spain had felt sexually harassed at some point in their lives.

One out of every four women said they had been groped or had been subjected to attempted gropes.

56% also felt there is not enough being done to prevent sexual harassment.

‘I am 22 years old and I have a mild psychological disability.

‘Four men kidnapped me and raped me repeatedly.

‘Not content with this, they ran me over seven times.

‘Still alive, they sprayed me with gas and set me on fire.

‘Three of my murderers are on the streets.

‘I am telling it because Sandra Palo can’t.

‘#Cuéntalo When I was 12 a man on the bus masturbated next to me. I was in shock and didn’t know what to do. His leg prevented me from leaving. Finally I could get off. I arrived at home crying. “You have to be careful on buses”. ME? 36 years old and I’m still scared of buses.’

‘At the age of five my cousin abused me in my own house. I was so innocent and I thought that everything was a “game”. To this day I can’t tell this for fear of separating my family and I have to act as if nothing ever happened.

‘I am telling it because my friend can’t.

According to a public report by Eurostat, in 2015 Spain was one of the countries with the least reported cases of sexual violence in Europe, with 2.65 cases reported per 100,000 inhabitants – compared to 62 in England.

However, experts argued that the countries with the highest number of reported cases have a greater tolerance towards sexual harassment, meaning victims are more likely to report the crime.

Data by the Metroscopia study echoes this, as a staggering 80% of female and male respondents said they believe Spain is a predominantly sexist society.

‘I prefer to keep my #Cuentalo for me because of the fear I feel, it terrifies me that this person could see it because they still look at my social media. You, me and all the people who love me, know what you did. I prefer that they tell it for me.’

So far, it is believed there have been over 400,000 tweets – and counting – shared with the hashtag #Cuéntalo.

‘Reading all the #cuentalo tweets. I can relate to so many of them but for now… they will tell them because I can’t bring myself to. #girlpower #feminst’.

Reading all the #cuentalo tweets. I can relate to so many of them but for now…lo cuentan ellas por que yo no me animo. #girlpower #feminst 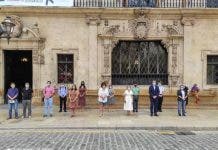