SITTING high on a promontory lording over the bay of Pollensa sits one of Spain’s most exclusive properties. 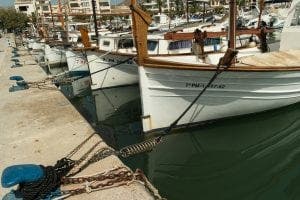 Owned by British financier, Lord James Lupton, La Fortaleza was once the country’s most expensive home on the market for €125 million and most recently became famous as the home of scoundrel business mogul Richard Roper, played by Hugh Laurie, in the BBC drama, The Night Manager.

An incredible place surrounded by water and pine-covered hills, the 400-year-old fort has put up countless VIPs over the years, including Spanish artist Joaquin Sorolla, who painted it.

A massive 25,000 square feet of immaculately manicured terraces and gardens, it counts on two pools and seven separate villas in its grounds.

But it is the location at the start of the protected Formentor peninsula that makes it so exclusive – and perhaps justifies its price tag.

For this is perhaps Mallorca’s most remarkable stretch of scenery.

A dramatic finger of soaring peaks and plunging drops, no visitor to the island will forget the breathtaking 20 km drive – or cycle if you’re fit – to its historic lighthouse at the end.

It’s as stunning as anywhere in Spain and not dissimilar to the famous New Zealand backdrops in Lord of the Rings.

But the whole Pollensa corner of the island is amazing and just when you think the scenery couldn’t get any better, it does.

As a PR job the award-winning Night Manager couldn’t have done more to promote the area featuring both the town and its nearby environs heavily in the series.

The main thing to know is that Pollensa is only 45 minutes from the airport despite feeling like it could be a million miles away. 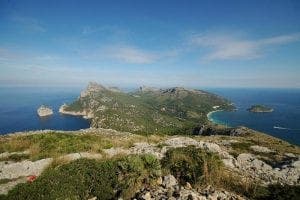 I have lived here for nearly two years now and can verify quite how different it is from the better known towns of Andratx, Calvia and Portals.

While they are all about being seen and splashing the cash, Pollensa is about understated glamour and refined taste.

This is the sort of place where you will bump into former British Prime Minister David Cameron having lunch, or TV presenter Louis Theroux, as I did recently on the beach, playing with his kids.

Pollensa is also the home of former England star Graham Le Saux (you know, the only footballer to ever admit to reading the Guardian), as well as the boss of UK supermarket group Iceland. In the hills nearby the famous March family (of the private Banca March) have their amazing estate.

Most people first head for the coastal town of Puerto Pollensa, or as it’s known locally ‘PP’.

You will first be amazed at the views and how calm the sea is here… it is also a little bit warmer than most other beaches on the island as it is so protected.

From here take a look around the marina and the moored boats before taking a stroll along the shaded Pine Walk, which curves for several miles around the bay.

Flanked by a wonderful sandy beach on one side and some of the most desirable properties in Mallorca on the other, this is a must-do stroll.

Head in the other direction and the long beach stretches for miles, with numerous places to stop for lunch or a cocktail, or to rent a sunbed.

If you have children they will be thrilled as there are several well constructed play areas where they can let off steam to their heart’s content while you can sit nearby keeping an eye on them but still relax.

For a bit of activity, why not head out for a snorkel via a local dive company, or rent a kayak or paddleboard. There are also various yacht charter companies in the town.

Looking for somewhere to eat? You will not be disappointed. All along the seafront there are numerous quality restaurants, such as Cappuccino and Abacco, which offer up a brilliant place to people-watch combined with wonderful sea views.

If you want something really special head for lunch at the privileged Royal Yacht Club or check out La Llonja, which has an amazing position just by the entrance to the port. It’s upstairs so has arguably the best panoramic view of the bay.

Alternatively, step two streets back and you’ll find the vibrant town square where there are often events or festivals.

With so many options, choosing the actual one is very hard indeed but wherever you go you will not be disappointed. Look out for Osteria N15, this boasts chef Roberto Maggioni who has worked in the famous Lago in California and has a fantastic menu and great ambience.

On the subject of numbered restaurants, I also like No 31, recently opened by Scottish owner Siobhan, as well as the fabulous Finca 49, which recently featured on Channel 4’s A New Home in the Sun.

Once the sun sets and you’ve eaten to your heart’s content it’s time for cocktails. Look out for performances from local guitarist Guillermo Rotger, who often teams up with the founder of The Climax Blues Band Derek Holt. Both brilliant musicians who live here all year round and appear regularly bringing us top quality music to enjoy for free.

Anything you need for the perfect holiday is here. If you should find something’s missing however then just speak with the very helpful Ian and Sam at Multihire who will sort you out with pretty much anything at all be it cots, bikes or food hampers.

You name it, they’ll sort it and the trusty Brian will deliver it as required. They’ve been here 16 years now and there’s not much they can’t get.

When you fancy a change of scenery take a five minute drive (or just hop on the frequent bus) up to the historic old town of Pollensa.

Somehow this beautiful and historic place has managed to keep the feel of a typical Mallorcan town whilst embracing all the tourists that come along to experience it.

A network of cobbled streets boast beautiful architecture at every turn, and a large shady town square flanked with quality restaurants and coffee shops.

Follow the discreet signs to the foot of the Calvari Steps and a smaller but equally vibrant square.

If you’re feeling strong then here are 365 challenging steps, split into 12 sections, that take you up to a tiny chapel and café at the top.

You’ll be glad to know there’s usually an excellent guitarist playing along the way giving the perfect excuse for a breather!

If you can make it the views are truly spectacular. There’s a gentler way down which has 12 statues representing the stations of the cross and giving different vistas of the countryside. Directly opposite the Calvari is another even more impressive hill called the Puig de Maria. This is not for the faint-hearted and is a serious walk of about 45 minutes.

It’s only to be attempted if you are feeling fit and are wearing sensible shoes, but at the top you will be treated to an absolutely breathtaking 360 degree view of the whole region.

There’s an overnight hostal up there too with a really good café, also plenty of seating to rest up before you return to ground level civilisation.

For those who fancy a bit of shopping, the centre of Pollensa has some excellent boutiques, while there is a good Sunday morning market that takes over the town with quality home made goods and jewellery, clothing and fresh food for sale.

Whenever you visit be sure to stop at Club Pollensa for a truly Mallorquin experience. Not only is the food amazing but the actual building itself is very beautiful with some really good artworks on display inside.

This was originally built at the start of the 20th century as a club for local cyclists, and cyclists are still one of the key tourist sectors in the area.

The surrounding roads are smooth and easily navigable and there is a whole network ready to support and enable them, be it the casual afternoon jaunt on an electric bike or a lycra dressed team out to train hard and fast.

One of the key links to the area is British cycling team, as well as Team Sky, who are now annual visitors to the town, including Chris Froome and Bradley Wiggins.

Take a look inside the beachside Tolos restaurant in PP and you will quickly understand the impact.

The walls are lined with photos, while one of Wiggins bikes hangs from the ceiling.

The link began before the Beijing Olympics in 2008, when the British team was meant to be training in Italy, but they just couldn’t find enough privacy or the right places to rent.

“I ended up having to find the whole team accommodation here in peak season,” explains the restaurant’s PR Clair Merrigan, who moved here from Wales two decades ago.

“It was May but somehow we managed to get everyone housed and we mostly fed them in Tolos,” she added. “It worked so well we have continued the relationship until the present day.”

Before returning home no visit would be complete without spending some time at the little seaside village of Cala San Vicenc, a charming little resort consisting of three small and pretty sandy coves.

The sea is much more forceful here but is deep blue and clear. Sit outside Café Mallorca and be dazzled by the most amazing view of sheer mountains, blue sky and sapphire sea.

All in all, the Pollensa area is truly a magical place and it is no surprise that tourists return year after year, and often dream of settling here.

It’s a welcoming place, chic and sophisticated, yet casual and relaxed. I am so happy my partner and I made the leap to move here. We have never looked back.