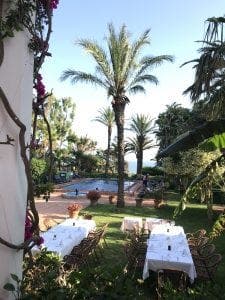 TAKE a slice of Ibiza cool, a dash of London savvy and a gust of Europe’s most wonderful wind and you find the hippest beach club on the Costa de la Luz.

Welcome to Valdevaqueros, where the world’s best kitesurfers and windsurfers mix with some of Andalucia’s coolest kids.

From the friendly staff to the athletic punters, this is a place to spend the day and best understand what comprises the unique Tarifa vibe.

Sit on a beanbag with a cocktail in hand and watch the scene unfold as the kitesurfers kit up and a cornucopia of characters pass on through.

In one of the most picturesque settings imaginable, you will be mesmerised as the dozens of colourful kites bob up and down with a backdrop of green mountains and the massive Punta Paloma sand dune in the distance.

Take a stroll down to the white sandy beach and you’ll find everything from trinket salesmen to a rail of bikinis, while the sea is a wonderful clear blue and perfect for a dip.

Back up in the protected leafy compound, you can grab a healthy buffet lunch, or a delicious burger, and also shop in the hip clothes shop Graffiti next door. 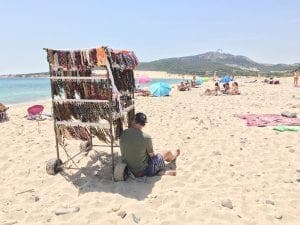 If you feel active you can rent a windsurf board or book a kitesurf lesson, while the vast majority of visitors simply grab a beer or cocktail from the Tumbao bar and sit back and relax.

Boss David Alvarez, a butcher by trade, works hard to run a happy ship, by bringing in a mix of good DJs and flamenco groups, and serving up the best burgers from a burger truck, which he takes to events around the country.

Apart from their main Hurricane Hotel, now an institution in Tarifa, the trio own the laid back Punta Sur hotel nearby, as well as a hotel, Hurricane Jeri, in Brazil. 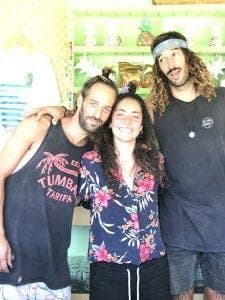 “We are always looking for new ideas and improving quality, while not putting prices up for four years,” explains James, who is very much the life and soul of the Hurricane.

A writer and film director/producer – who once managed massive 80s band Adam and the Ants – he has recently overseen the expansion of the gym, introducing mountain and e-bikes to rent, as well as bringing in a new chef, Ivan, a local lad from Tarifa.

“He is changing the menu daily to ensure guests can stay in as much as possible,” adds James. “He is upgrading traditional Spanish cuisine with modern touches, which is going well.”

The hotel has also recently started to develop a Wellness program and contracted the services of a leading psychotherapist, Dr Alejandra Hallin, who has clinics in Marbella, Sotogrande and Gibraltar.

Her team of 16 fully-trained therapists deal with a range of issues, ranging from anxiety to depression and eating disorders to drug and alcohol addiction.

They also specialise in family issues, such as school bullying, insecurity and phobias.

“She has been really good for me and helped me get over an anxiety problem,” explains James. “I thoroughly recommend her.”

The story behind the Hurricane group began over three decades ago when oldest brother Peter made an unscheduled stop off in Tarifa, en route from his home in Ibiza to a holiday in Morocco.

It was 1984 and he had soon found a partner (an Australian boardmaker Barry Pussell) to help him open the coast’s first rental business. 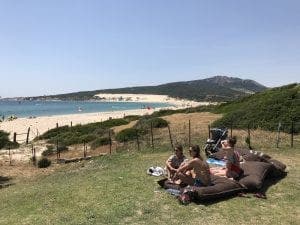 “It was a low key launch and we had no idea how well it was going to go,” Peter explains

But, Peter quickly realised that in order to keep the growing number of surfers happy they needed to offer accommodation, so the following year he and his brother Michael, a builder, bought an old ruined 12-room hostel just up the road.

His well connected third brother James, who speaks an incredible seven languages, also got involved, helping to make it one of Andalucia’s hippest places to stay.

Their hotel in Jericoacoara, Brazil, meanwhile, continues to go from strength to strength, having opened a new wing last year and a second restaurant this year.

“It is coming along really well,” explains James. “It has become a very popular place to stay and is nearly 90% occupancy all year round.”

The Hurricane story would not be complete however, without a mention of Peter’s son Liam Whaley, who is one of the world’s top kitesurfers, winning the world championships a few years ago.

Having taken up the fun, high-adrenaline sport from the age of nine, he now travels the world competing, but can often be found hanging out an training at Valdevaqueros, where it is not uncommon to have 40-knot winds.

“There is never a shortage of wind here,” he tells the Olive Press. “And it is one of the most fun places to live.”