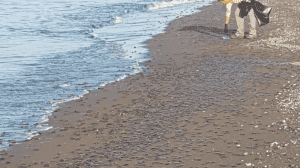 A WAVE of jellyfish hit the Costa del Sol along with the early August heat, giving swimmers an attack of the wobbles.

The flotilla invasion forced many beaches from Malaga to Mijas Costa and beyond to hoist yellow flags, warning swimmers to exercise caution.

Some beaches, including several in Manilva, put up red no-swimming flags, with lifeguards cautioning the public to be wary even when walking along the shore.

The tentacled terrorists, some of which pack a powerful sting, washed up in the Levante storm over the Alboran Sea, just east of the Gibraltar Strait, affecting 85% of the coastline.

Though jellyfish counts have since decreased at some beaches, the Spanish National Research Council has warned of a significant surge in their numbers in the Med this year.

Jesus Bellido, a biologist specialising in jellyfish for the environmental conservation foundation Aula del Mar, found that they were atypically abundant this summer.

But the good news is, they are usually located on specific beaches for isolated days, not on a majority of the coastline for an extended period of time.

According to Bellido, the Aula del Mar is working on finding a reason behind these influxes in a bid to scientifically establish safe areas on beaches¡, and has requested help from the public in reporting cases where beaches have been invaded.

Meanwhile Malaga Mayor Francisco de la Torre is looking into alternative uses for the tons of jellyfish already collected, calling for an inquiry into their use in the fields of health and cosmetics.

And tapas, perhaps … in some Asian countries they are eaten as a delicacy.