THEY’RE more photographed than Miss Gibraltar and they grab as many headlines as the Rock’s Chief Minister, mostly because of their mischievous monkey ways.

But despite a few hairy moments, the Barbary macaques of Gibraltar are not as scary as people think.

According to Dr Eric Shaw, the British Territory’s resident Monkey Man, they’re more chilled than we are.

“They are the most tolerant species you are ever going to find,” insists Dr Shaw, a leading player in monkey conservation for over 25 years.

To find out more, we visited the Helping Hand Trust where he has been in charge of Gibraltar’s non-military troupes since 1988, and has an intimate knowledge of their personalities and behaviour.

There are many tales spread about Gibraltar’s monkeys, even though they are tailless themselves, I joke. Well, there’s the first monkey myth exploded. They do have tails, says Dr Shaw, but they are only the length of a grain of rice.

Also contrary to popular belief, there are not as many macaques on Gibraltar as people think – 196 to be exact, dispersed around the Rock in troupes ranging from a pueblo-sized 10 to a metropolis-sized 36. When Dr Eric Shaw and his team are counting them it can take them up to a year to complete the task.

It is believed that the macaques have been resident since the 12th century as they are depicted in paintings of the period. There are 80 different species but centuries ago, this specific type – the only ones that lives outside Asia today – was also found in Scotland, Ireland and Italy, probably as a result of the international exotic pet trade which continues today.

Gibraltar’s macaques are wild, the only free-ranging primates in Europe. They have the freedom of the Rock in no small thanks to the legend that if they leave, Gibraltar will cease to be British. Sir Winston Churchill took that very much to heart when he topped up their dwindling numbers during WW2, just in case…

Females rule in this matriarchal monkey society although males help to raise their young and have a playful and protective instinct where offspring are concerned. Indeed, male monkeys are sometimes protective to human babies and have been known to dash over and scare parents.

They’re also territorial and when we approach them too closely to take pictures we often leave them only two choices: fight or flight. Macaques have sharp teeth and can weigh a boisterous 20 kilos so watch out.

“They are not vicious, it’s just the natural behaviour of wild animals,” says Dr Shaw.

“They are curious and protective and we shouldn’t be misled by their occasional outbursts of anger, they are really very chilled.”

However human interaction rubs off on macaque behaviour which resulted in cheeky monkeys invading the town and private homes and snatching tourists’ belongings, once even climbing onto a baby’s pram.

“People have a bad habit of feeding them so they have become accustomed to knowing when food is around,” says Dr Shaw. “It’s a common mistake made by new mothers taking prams up the Rock with baby food stored underneath – the macaques will go for it.”

As primates ourselves, we’re also naturally curious but the danger comes from getting too close. If that happens, look out for a monkey pout, a warning sign not to come closer. If you feel a monkey invading your own space, pout back.

Gibraltar’s monkeys have adapted to Instagrams and selfies to become regular social media stars but that’s another monkey myth.

Dr Shaw has a simpler truth: “Macaques are threatened by prolonged eye-to-eye contact and when you’re taking your shot, your eyes are covered.” 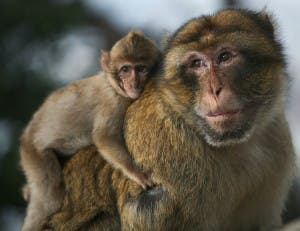 John Culatto - 29 Jan, 2023 @ 09:00
THE Gibraltar Government has called the twelfth round of post-Brexit talks between the UK and the EU ‘positive and constructive’ after they ended without...