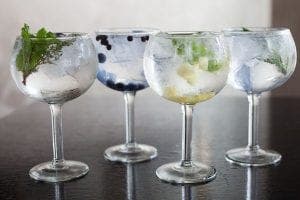 IS gin and tonic good for your digestion?

Writing in Diario Sur, the scientist said such falsehoods are rumours which have been spread, most likely, to justify enjoying the British favourite without guilt.

“To suggest that a drink inflamed with alcohol will improve our digestion is wishful thinking,” he said.

He warned of the consumption of alcohol in general, citing its relationship with many cancers.

“Alcohol leads to many problems. Its relationships with cancers such as liver, colon or breast cancer is more than remarkable.

“It produces heart problems and a wealth of mental problems.”

But more relevant here, he adds: “It can wreak havoc on the digestive system, producing gastritis or direct bleeding of the stomach or esophagus, as well as the pancreas and usual liver issues.”

He adds: “It seems clear that a drink like gin, which is at least 40% pure alcohol, is not an ally when it comes to the digestion of a meal.

“And what about gin and tonic? Well, I’m sorry to reiterate the same message, but this popular drink has nothing in its composition that can help the bodily function of digestion.

“In fact since the tonic contains sugar quantities similar to those of a soft drink, it can lead to a significant rise in blood glucose, a challenge for our metabolism.”

But alcohol in moderation is okay, right?

Nope, not according to experts in America.

“There is no such amount that keeps us away from risk,” explains Morallon.

“The relationship is clear, the higher the consumption of alcohol, the greater the risk of cancer.

“The latest study to support this claim is published by the American Society of Clinical Oncology, which confirms that all alcohol consumption, even moderate, entails a level of cancer risk.”

While there have been studies on the benefits of moderate alcohol consumption, due to the dilation of blood vessels, these, according to Morallon, are not strong when it comes to scientific evidence.

He conceded that the psychological impact of enjoying alcohol, particularly with friends, in a moderate way, could outweigh the physical health impact, but that this was difficult to measure.

The expert advised taking a walk after a meal as it will help regulate blood glucose levels and help your intestine’s processes move better.