THE bombs detonated in Marbella and Benahavis yesterday are believed to be a revenge attack in the Costa del Sol’s escalating drug gang warfare.

On Wednesday at 1am a car bomb went off outside a villa at a gated community in Mirador de la Alqueria, Benahavis.

Moments later another explosive device was detonated in neighbouring San Pedro outside a car wash on an industrial estate.

The owner of the car wash is the same man who lives in the villa, where the burnt out shell of a BMW used in the attack was found.

Dramatic images at the scene of the warehouse blast show doors ripped apart and windows shattered.

No one was injured in the attack and so far no arrests have been made, though police believe the attacks are a case of ‘score settling’ between gangs.

The man targeted is believed to have snitched on perpetrators for the previous torching of a gym near to the car wash, which targeted drug lord ‘Maradona’.

So far no arrests have been made, but a police spokesman said: “National Police are investigating the circumstances surrounding an explosion at a warehouse on an industrial estate in San Pedro in the municipality of Marbella.

“The possibility of a gangland-style attack has not been ruled out. The possible links between this explosion and another at almost the same time, near a house belonging to the owner of the warehouse that was targeted, are being investigated.”

The blasts come amid a spate of gang-related violence that has plagued Spain’s Costa del Sol in recent times.

In an Estepona shooting this month, first reported on by the Olive Press, a gypsy drug dealer wound up dead and fingerless in Algeciras, after being bundled into a car by a rival drug gang.

Last month in Cancelada a British man opened fire on police before they gunned him down in broad daylight. 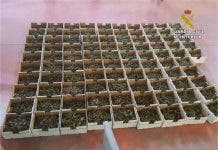 Alex Trelinski - 25 Nov, 2020 @ 20:00
HEAVY rain is set to hit the Costa Blanca tomorrow(Thursday) with a yellow alert issued for coastal areas for Friday.