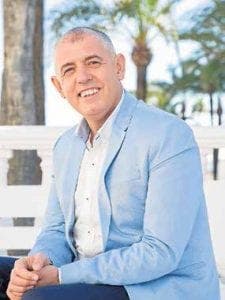 What is the biggest draw to Manilva?

I’m a big fan of the green spaces and the fantastic expanse of coastline, some 8 kms in total. We are working really hard not to over-develop the coast and have actually dropped density levels since I came to power

What about the history here?

Well there is actually an incredible amount to enjoy, such as the castle, near Duquesa, and the fascinating Roman archaeological site we are currently exploring beside it. The Romans had a key base in Manilva and we understand they made a lot of the celebrated fish paste Garum here, which was exported back to Rome. I am also fascinated by the Fortress of Los Castillejos de Alcorrín, an eighth century castle, which was only discovered in 1989.

Why did you run for mayor?

I’ve now spent 16 years in public office, and have held posts such as councillor of sport, youth and infrastructure, as well as working in the technical office in the Association of Municipalities of the Western Costa del Sol. But as I am from here I wanted to come back and help my village, where I originally ran a plumbing shop.

After two years in office, what have you achieved?

I am happy with the changes we have made to the historic centre, as well as the covered pool in Sabinillas and the improvements with the wine museum. I think we have bettered the local quality of life (better cleaning, more green spaces and gardening, etc) while also lowering taxes for three years in a row.

What steps are being taken to get the type of town you want?

We’re very lucky that Manilva has a lot of potential in terms of tourism, sport and culture. My plan for the future is based on creating new infrastructure projects and aiming to get 5% of the cultural tourism that comes to the Costa del Sol.

Any future projects you want to highlight?

We’re due to further improve the historic centre of Manilva, in particular with four streets and with more works on the church. I want to encourage more people to come up to the old town.

How would you define yourself politically?

While initially from the IU (United Left) party I am much more central in terms of my views today. I live in the heart of town, near the town hall and feel like just another member of the community, leaving my door open to everyone.

Any message for the foreigners here, particularly with Brexit looming?

We are very proud that so many foreign residents have chosen Manilva as their home, in particular the British, who number 3,168 out of our official census of 17,500. We know there are many thousands more, perhaps 5000 who come and go and we hope they continue to enjoy our town. And we will certainly make you feel welcome whatever happens with Brexit. We are really hoping for a positive result on March 29.