SPAIN’S longest urban slide has been unveiled on the Costa del Sol.

At 38 metres in length, the new work is not designed for children, but is intended to speed up journeys.

The old route took 10 minutes from point A to B

The stainless steel, semicircular channel in Estepona, has a gradient of between 32 and 34 degrees, and links Calle Reina Sofia and Eslovaquia.

This allows pedestrians to speed between the two streets in seconds, avoiding the 10-minute walk around.

The development is part of Los Niños Park, which has seen its green space expand by 14,000 square metres to 38,000.

Street lighting, furniture, irrigation systems and typically Mediterranean foliage are among the other additions to the area.

It comes after it was revealed that spending on public works in Estepona has totalled €100 million in the last eight years. 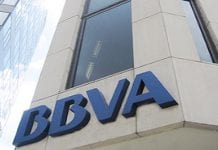 James Warren - 27 Nov, 2020 @ 15:00
THE merger between two of Spain's largest banks BBVA and Banco Sabadell has ground to a halt as disagreements have emerged over...