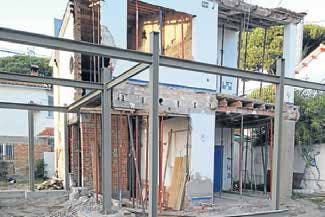 LIONEL Messi’s latest restaurant venture has finally been put back on track after being blocked by the town hall for a YEAR.

The Argentina football star will now resume constructing his beachfront restaurant in Barcelona after the local government shut him down when it discovered part of the building was not included in the original planning of the works.

Construction has been on hold for 12 months in the upmarket Castelldefels, with Messi desperate to have it finished for this summer season.

Situated in the Lluminetes neighbourhood, the Argentine restaurant will be run by his wife Antonella Roccuzzo and will have capacity for 100 people.

Built in the 1960s but now in ruin, the property is an old farm and is just a 60 second walk from the beach.

Using his real estate company Edificio Rostower SL, the five-time Ballon d’Or winner has already lost around €150,000 on the project, however, but will hope to turn it around now he has been given the green light once again.

It comes after the father-of-three’s previous foray into the restaurant world ended in abject failure some three years ago, when his Bellavista del Jardin del Norte eatery in the centre of Barcelona closed after two years following a drop in profits.

The Lluminetes barrio has been on the up in recent years thanks to an influx of Barcelona FC stars moving into the area, including Messi.

It has seen the arrival of pricey restaurants and boutique hotels while the value of many homes has far surpassed the €1 million mark.