SPAIN is the fourth best country in which to be an expat.

That is according to HSBC’s latest Expat Annual Classification.

The Iberian country jumped up to fourth in the world after being ranked 13th globally in 2018.

Only Switzerland, Singapore and Canada rank higher than Spain, while the UK is rated as the 27th best country for expats.

New Zealand finished behind Spain in fifth, while Australia, Turkey, Germany, United Arab Emirates and Vietnam made up the rest of the top 10.

The results, taken from HSBC’s Expat Explorer survey, are based on wellbeing, society, finances, ambition and ‘little expats’.

“From Catalonia to the Costa del Sol, expats are feeling benefits to mind, body and soul,” reads a summary of Spain’s results.

It comes after another survey revealed that for British expats, Spain was the best country in the world.

The country was ranked best in the world for ‘quality of life’ and ‘physical and mental wellbeing’, and third-best for ‘ease of settling in’.

Expat parents will also be pleased that Spain is the second-best place for children to ‘make friends’ and ‘learn’, while general schooling is ranked eighth globally.

“Be positive, don’t let the bureaucratic systems get you down, don’t try and do everything at once and learn the language,” said one respondant to the survey, based in Spain.

Meanwhile, Spain didn’t score as highly for other aspects, like ‘political instability’, ranked 15th, and ‘career progression’, a lowly 33.

A total of 18,059 people, all over 18, were asked 27 different questions between February and March 2019 to compile HSBC’s results.

“While Spain doesn’t receive the same plaudits for career progression and salaries as it does for its relaxed pace of life and scorching summers, expats there are happier, healthier and their aspirations are to live comfortably amongst beautiful surroundings,” the report concluded.

LONG READ: From the Costa del Sol to the Costa Blanca, British expat firms are showing their true grit in the face of Spain’s... 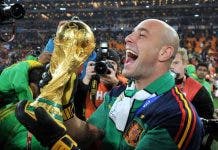