SAN Pedro de Alcantara has been making a name for itself in the food stakes for years now.

Just west of Puerto Banus, the town is brimming with enough high quality eateries to leave any visitor spoilt for choice.

From long-standing tapas bodegas to new fusion hotspots, below are some of the best which always guarantee great food. 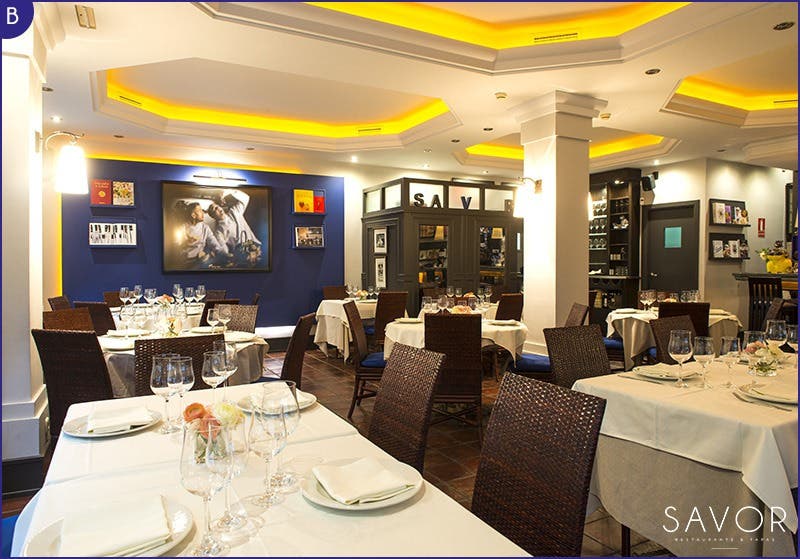 As the newest kid on the block, Savor is really helping take San Pedro to the next culinary level.

This haute cuisine tapas fusion joint sits across the road from Pub Charles, on Calle Andalucia.

Headed by talented chef and owner Pablo Castillo, the menu is inspired by food from around the world, but without forgetting his ‘time spent in Cuba and Malaga roots’. 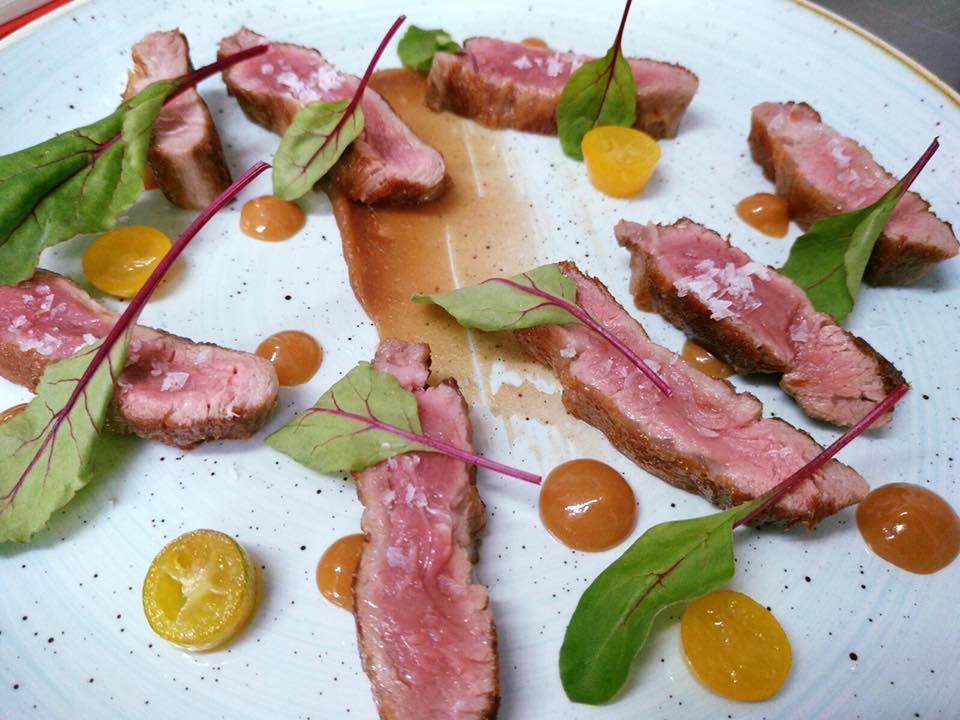 The result is quirky and flavoursome dishes like ‘taco-tapa’ and ‘Sandwich Cubano’.

There are also Japanese inspired dishes like the niguiri croqueta with kimchi and ‘pan con tunaka’.

All served in cool and sophisticated environment and with excellent service. 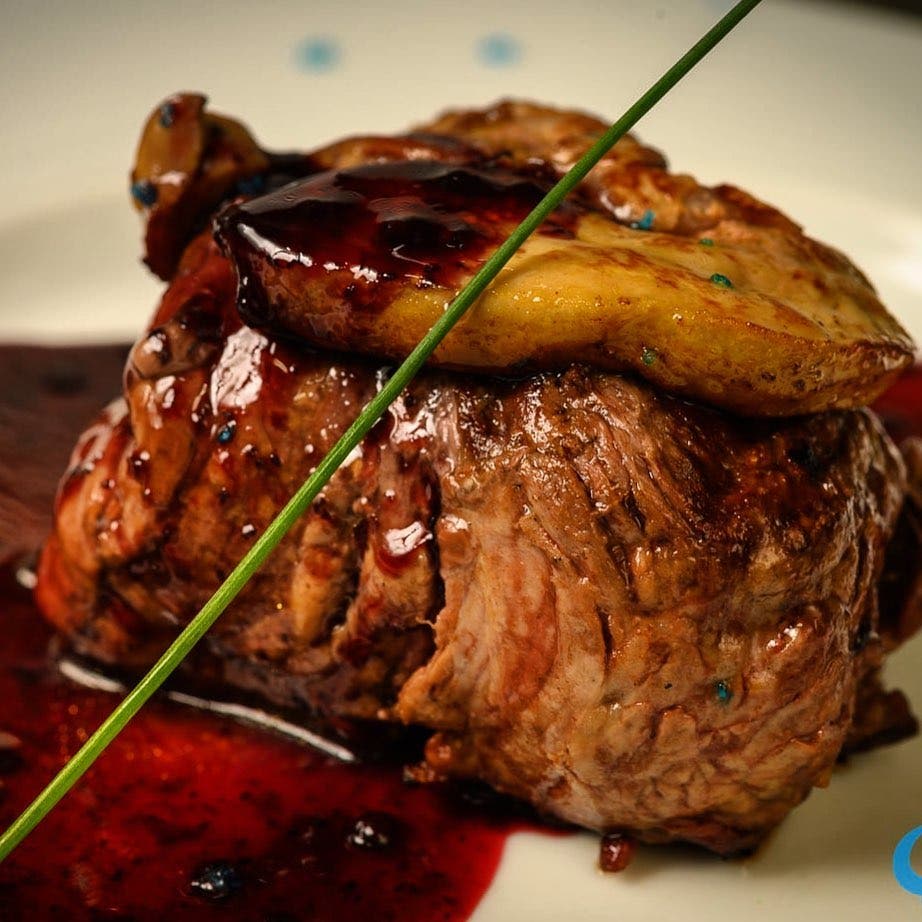 While technically an Argentinian restaurant, it didn’t feel right not to include La Rosa on such a list.

Situated in Guadalmina Alta, everything here is perfection, from the starters, including black pudding, tempura vegetables and foie, to the melt-in-the mouth steaks and meats – all before a 10/10 dessert. 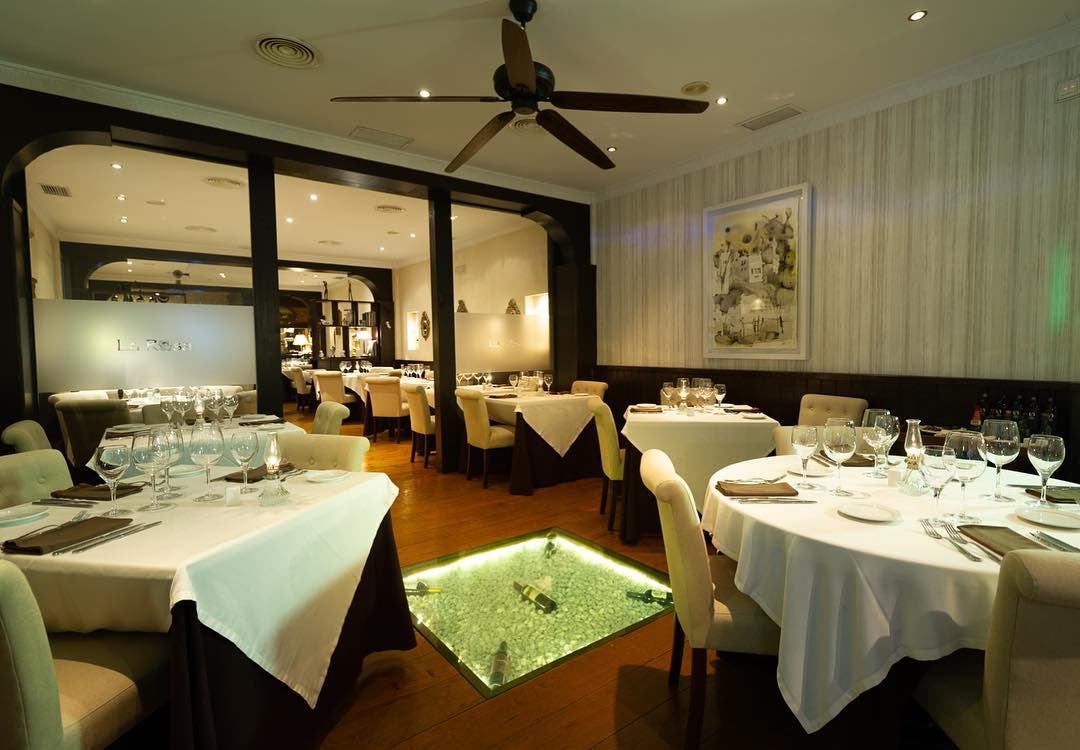 It’s rare that a restaurant perfects all three but La Rosa hits it out of the park with its thinly sliced and deliciously caramelized apple pie.

Other than the food, the lovely staff really know their stuff and their attentive and professional service is unrivalled. 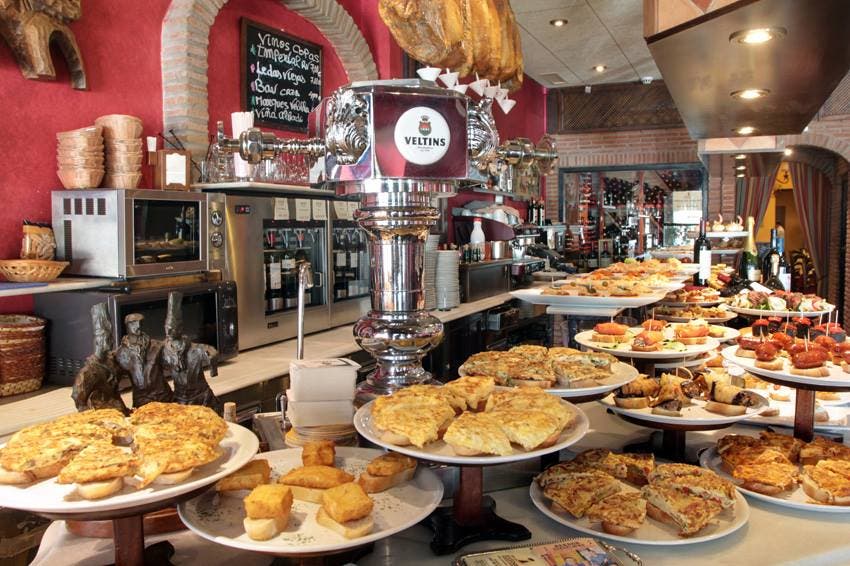 When it’s not causing a stir with its window signs (or refusing to adhere to new smoking regulations), the Asador is a must-visit.

Located in Guadalmina Alta, half the restaurant has a cool, relaxed tapas bar vibe with stools and high tables while the other half is of a more formal setting with larger tables and chairs.

While there are two menus, you can order from both, wherever you sit, but it’s pintxos are what really steal the show.

The team are also specialists in meat and fish while waiting staff can offer you expert wine and drink-pairing advice. 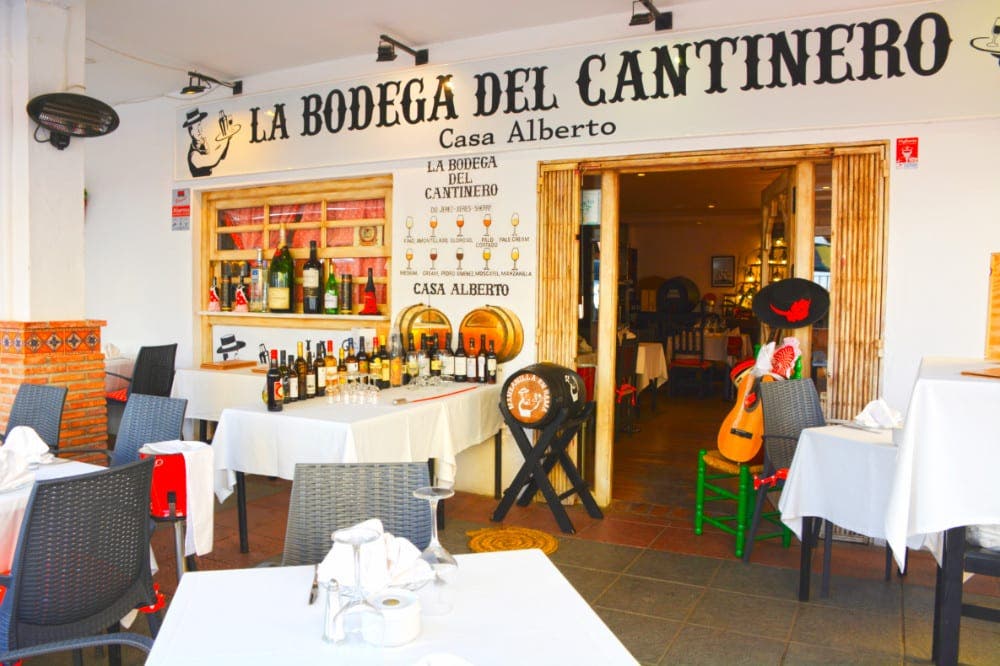 Although it hasn’t quite been there for decades, La Bodega del Cantinero has made a name for itself as one of the best restaurants in town.

Its inhouse sommelier and waiter Juan Padron describes the popular eatery, on Calle Andalucia, as a ‘little corner of Jerez on the Costa del Sol’, owing to its extensive and unrivalled collection of sherries and wines.

The staff also make their own music and often perform a song or two, while flamenco shows are a regular feature.

Meanwhile, owner Alberto couldn’t look after you better while the food never disappoints – particularly the cheesecake, which is lit on fire after being doused in cointreau! 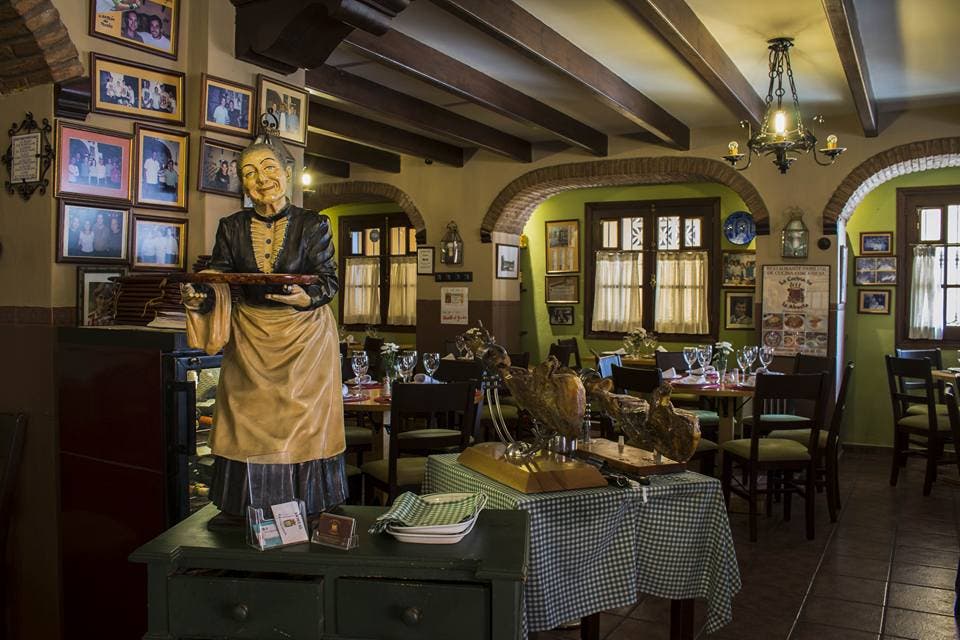 This rather new addition to the town appears rather unassuming at first glance, sitting on Plaza Vista Alegre, down the steps opposite Pub Charles.

But its Cordoba-inspired menu is hiding an explosion of flavour that will leave you asking why you haven’t heard of it before.

It’s black pudding is one of the tastiest on the coast while its rabo de toro is also magnificent (and don’t miss the melt-in-your-mouth pig cheeks in thyme sauce).

It has every portion size, from tapas to large plates, while the super-friendly staff are a perfect match for its home-cooking vibe. 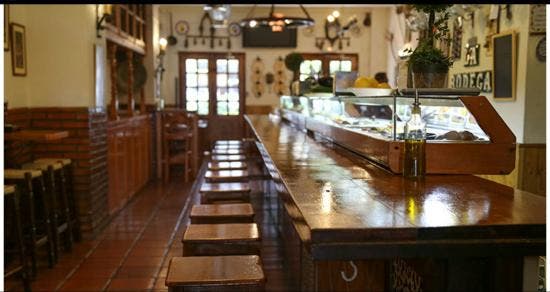 Nearer the centre of town on Calle Lagasca sits Bar La Bodega, which has been serving classic tapas to this once fishing village for decades.

Practice makes perfect and this tapas bar is certainly as good as it gets.

From fresh prawns and octopus to meatballs and oxtail, La Bodega meets every tapas taste and is the perfect stop-off for lunch or the beginning of a night out. 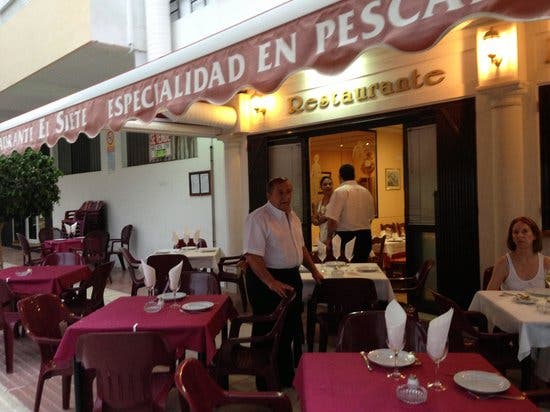 Tucked away on Calle Badajoz, this family run restaurant is a well-kept secret of San Pedro.

If you’re looking for a quiet spot to enjoy a long lunch or dinner, this place is perfect.

The family have been running it together for decades and serve traditional Spanish dishes, however they really excel with their fish – particularly their prawn pil-pil.

If you want a Spanish restaurant then it doesn’t get more authentic than San Pedro’s longest running eatery Alfredo.

Traditional would be an understatement, with wooden chairs, white tablecloths and walls covered in bullfighting memorabilia and bull heads.

This also translates into a typical Spanish menu with the likes of avocado and prawns and melon for starters (sharing is advised due to large portions), and around a dozen fish and meat options – although the lamb chops are a popular go to.

Think somewhere is missing from this list? Email newsdesk@theolivepress.es with your foodie tip

Anthony Piovesan - 6 Feb, 2023 @ 19:00
With Spain now home to the world’s oldest person the Olive Press takes a look at the lives of other Spanish supercentenarians Spain now has...