TWO sons were separated from their father for a few hours after the Spanish police prevented him from picking them up.

This is just one of the stories The Olive Press discovered at the land border with Spain, where Gibraltarians are being blocked entry into Spain.

It comes after Spain’s State of Emergency to stop Coronavirus was launched with immediate effect yesterday evening.

The new law prohibits Spaniards from leaving their homes for anything but essential services and employment.

On Sunday March 15, Glenn Cunningham was stopped from picking up his two sons who had been on a sleepover at their friend’s house in Spain.

“The frontier police didn’t let me go over even to pick the kids up just to bring them back into Gibraltar straightaway,” Cunningham explained.

“To get out of Gibraltar into Spain, they’re asking for documents to prove that you live or work in Spain.

“Without any proof that you either live or have a work contract in Spain they’re not letting anyone cross the frontier into Spain.”

In the end, he asked his friend to bring his 11 and 12-year-old sons to the frontier.

“The problem was my friend didn’t have his passport so he had to speak to the Spanish policemen,” Cunningham told The Olive Press.

“They then arranged with the Gibraltarian border guards to authorise them to come through on their own.”

In the end, it all worked out fine and Cunningham was happily reunited with his kids but it wasn’t as easy for other Gibraltarians.

The worst hit have been those who live mainly in Spain but are still officially registered in Gibraltar.

One local woman and her husband had just arrived at Gibraltar airport from a holiday.

They were meant to arrive in Malaga but after flights were cancelled chose to come directly to Gibraltar instead.

When they went to go home they were asked to show they had proof of being resident in Spain.

“We do not have any proof because we did not want to pay the extra taxes and lose our rights in Gibraltar,” she explained.

“Now we will have to remain in the tiny flat where our son lives in Gibraltar until this situation changes.”

While this couple were lucky enough to have a place to stay, The Olive Press wants to hear from other people who are now stranded in Gibraltar.

“The Spanish authorities are also telling people entering Gibraltar that they might not be allowed back into Spain unless they have a legitimate purpose for doing so,” said a Gibraltar Government spokesperson.

“They will only be allowed to cross the frontier if they can demonstrate they are accessing the country for a purpose allowed under the new State of Emergency law.”

With Spaniards being limited to enter Gibraltar unless they have proof of a work contract, huge queues are expected for tomorrow Monday too.

Meanwhile, Gibraltar buses will stop operating on all their routes except for their school service.

The Government decision to keep up local education could also be in doubt after various parents said on social media they would not be sending their children to school this Monday.

The latest statement from the Chief Minister says the situation will be reviewed every 48 hours.

He indicated that there is the possibility that the schools will become a child-minding service for parents who need to go to work during the day.

“It is contrary to his express statements of support for the attitude Gibraltar is taking in relation to dealing with slowing the inevitable spread of Covid-19,” said Chief Minister Fabian Picardo.

Fresh supplies are expected to arrive on Monday for both Eroski and Morrison’s after the panic shopping of the last few days. 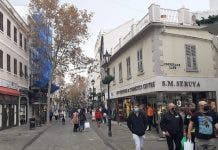