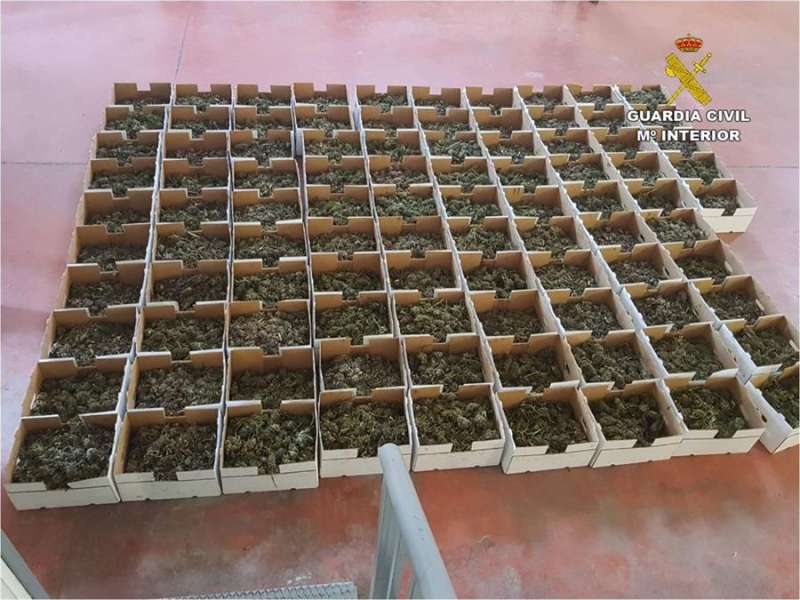 A STENCH of marijuana wafting out of an Alicante area warehouse has led to the downfall of a major drugs supply line to Switzerland.

Drugs worth potentially €750,000 on the Swiss black market were seized by the Guardia Civil.

The operation was rumbled after complaints over a strong odour seeping out at an industrial estate in San Vicente del Raspeig.

Guardia Civil agents used their noses to track the smell down to a warehouse which officially was meant to distribute hemp.

Frequent comings and goings at the premises were noted over a week of Guardia surveillance.

Agents sprung into action when a large refrigerated lorry left the premises and they intercepted it.

325 kilos of marijuana was found stuffed into bin bags.

A raid was then mounted on the warehouse as a further 175 kilos of marijuana was seized in addition to a large haul of drug growing equipment.

A search of a car owned by the gang leader uncovered €29,500 crammed into the dashboard.

Five men were arrested, aged between 27 and 49, and of Swiss, Spanish, Dutch, Swedish, and French nationalities.

Walter Finch - 8 Feb, 2023 @ 14:15
There was horror on the streets of Madrid as a visibly furious man set himself ablaze outside the Moroccan embassy, with the motive for...