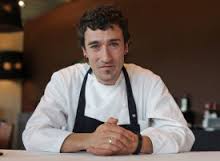 THERE are not many great meals that start with a picnic.

But at Bilbao’s Azurmendi lunch begins in an unusual glass atrium, enveloped by undergrowth and stumps of trees, contemplating a rather twee basket that has suddenly been thrust in front of us.

Inside is a leprechaun’s picnic of tiny ‘caipirinha’ balls, an eel sandwich and a spread of edible flowers on a ‘garden vegetable cake’ of hazelnut, chocolate and foie.

Changing by the month and washed down with a fabulous glass of ice cold flinty Txakoli, this is the way that chef Eneko Atxa likes to welcome the fortunate guests that are able to get a booking at his creative three-Michelin star cathedral of dining.

A restaurant inspired by the environment, by its own surroundings and, very much, with an eye on sustainability, Azurmendi – voted 16th best in the world, by Restaurant magazine – is about as far from the conventional meal as I have ever tried.

As much a social function as a place to fill up, Azurmendi uses geothermal heating, collects its own rainwater, has a fascinating seed bank on the roof, grows most of its own vegetables, and even makes its own wine. In short; this is an education, as much as an adventure. 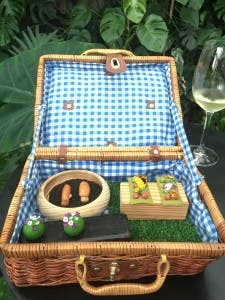 Like a visit to Charlie’s chocolate factory we are spirited away from the lobby picnic to another room filled with wonderful foodie creations.

Here, a small group of culinary scientists proffer us a mixture of amuses bouches including white balls of asparagus powder inspired by cotton, a dish of porcini, shiitake and oyster mushrooms grown in situ and a type of sweet corn milk, dubbed ‘morokil’

Next up we find ourselves in the corner of the giant kitchen, where 25 chefs from as far and wide as Korea, Mexico and even that celebrated corner of cuisine Albania, go about their business in the most calming, Zen-like fashion.

This is everything that Gordon Ramsey isn’t, with all the chefs collectively welcoming us with the Basque word for hello ‘agur’ as we enter.

It is a full half an hour before we are actually sitting down in the delightful cube-like dining room, with its clean lines, slate floors and acres of glass and wood.

Everything maximises the classic Basque countryside, the rolling green hills, stands of trees and, of course, the inevitable clouds that bob around in the distance, this being Spain’s wettest region.

“It rains 130 days a year here and that shapes your personality,” Eneko, 39, tells me, before revealing how many of his dishes are inspired by rock music, quite a few by British bands.

“Each plate has a different song and I come up with them at home before working on them here.”

He doesn’t want to be specific, but admits he is a fan of Led Zeppelin, as well as the Prodigy and the Chemical Brothers. “But I am also heavily influenced by the Basque rock bands of the 80s,” he adds.

Passionate and enthusiastic about the environment, it is little surprise that Azurmendi has won prizes for sustainability.

He is heavily influenced by the region and learnt a lot from the local masters, including Martin Berasategui and Juan Mari Arzak, and credits both his parents and grandmother as influences.

This all comes over with the main meal that starts with his famous truffled egg dish, which could be the most delicious mouthful I have ever eaten.

This is followed by easily one of the most beautiful; spider crab served with a Bloody Mary infusion, which starts as a Monet and ends as a Jackson Pollock. 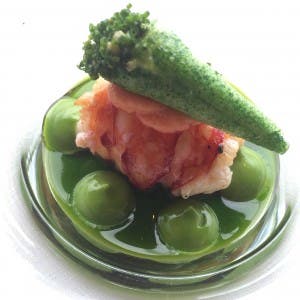 Indeed, of the seven main courses that follow, each is as rich as it is creative.

There is roast sucking pig and even a cauliflower dish with fried eggs and truffle that tastes amazing. By the time the roasted duck comes I have run out of superlatives. It is so rich, thank god there is a meaty 2008 Rioja Contino to keep it in its place.

The only real disappointment are the puddings, which sort of drift in and out without fanfare and are hardly worth a mention.

Wine-wise the advice was superb and it is impossible to fault the service, which is easily worthy of three Michelin stars.

Eneko, if London doesn’t fall for you, then I’m a leprechaun… and please come south!