FANCY buying a dream hotel on the Costa del Sol, but short of a few bob?

Well, get a website and a business plan together, upload a couple of good photos and put on your fundraising hat.

That is how Yorkshireman Chris Risbey, 38, managed to beat the banks to raise 75,000 euros in just four weeks to secure the lease of historic 16th century Hotel Palacete de Manara, once owned by a knight Don Miguel de Manara.

In total, 93 investors – including pop band Belle and Sebastian – have invested in the project, known as Dream Hotel Spain.

Risbey, 38, came up with the idea after being roundly turned down by dozens of banks and other normal investors.

“I kept getting frustrated by all the normal channels,” Risby explained. “I had a great business plan, all the experience and a great venue but the banks just did not want to know.”

Now, after changing tack to set up the blog last month with some evocative photos, he has snared a number of big investors, including one 10,000 pledge from Glasgow.

Next up came the promise of money from close mate Chris Geddes, the singer from pop band Belle and Sebastian.

But within days there were investment pledges coming in from South Africa, America and all over the UK.

He is now even hoping celebrity mates from pop band Franz Ferdinand will put their hands in their pockets.

“Annoyingly they are being really tight-fisted at the moment, but I still hope they are going to come through,” explained Risbey, who studied hotel management at Strathclyde university.

Each of the investors gets vouchers for accommodation and food worth the price they invested at the eight-bedroom hotel, in the village of Montejaque. They will also get a share of the profits.

Now as the final pledge-raising deadline set for October 23 approaches, Risbey expects to have around 100,000 euro to turn the historic hostelry into a more modern boutique hotel.

“I’ve now paid the deposit and have a few big meetings coming up that should raise a fair bit more,” he explained.

Risbey has used all his business acumen from ten years working in hotel chains, including the Hilton and Stakis group, to quash any initial fears regarding the credit crunch.

“Banks these days don’t want to stump up that amount of money but just because times are tough it doesn’t mean people have to sit there and accept it,” explained Risbey.

“In the present climate I think its a great way to seek investment for a new business and to have lots of shareholders visiting and talking about the hotel will give us a fighting chance to see it succeed!”

Risbey came up with the plan to buy a property between a big group of investors two years ago.

“I looked at loads of different places. I was thinking of doing it on Facebook, but in the end I just did it through word of mouth and our own blog, which gets over 100 hits a day.”

Risbey, originally from Wakefield, in Yorkshire, moved to Spain in 2006 and worked initially for Sky television.

He concluded: “I have received support from all over the world in places I never would even begin to imagine, such as South Africa. But, best of all was the 10,000 euro pledge from one mate in Glasgow!”

visit the blog at www.dreamhotelspain.com 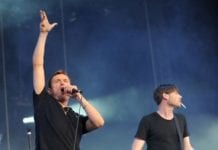 The best of Spain’s summer festivals

Laurence Dollimore (Digital Editor) - 23 Sep, 2020 @ 14:51
It is the second-largest daily increase since the start of the pandemic, surpassing yesterday's 1,536