THE BEAST, as he is often known in Spain, has just won the world’s most prestigious tennis tournament.

Making himself World Number One in the process Rafa Nadal has assured that Spain is now firmly on the map in not just football, but tennis as well.

But, as the handsome tennis star, returns to Spain with his Wimbledon trophy will he be lording it around Barcelona and Madrid or spending the summer at the parties on the Costa del Sol?

Well, actually no. Rafa, a quiet country boy will be returning to a backwater of his island home of Mallorca, where his childhood sweetheart will help to bring him down to earth. 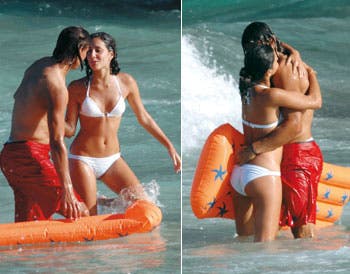 Labelled his “secret” girlfriend by the British papers last week for rarely watching him play, the Olive Press can reveal that Xisco Perello, 20, has in fact been working hard on her business studies degree at Palma University.

A close friend of Rafa’s younger sister Maria, she has known the tennis star since he was a small boy, when they grew up together in the unfashionable industrial town of Manacor.

When news of their relationship broke in the summer of 2006, he told the Spanish media that she was “merely a friend” and not a fiance.

But a few weeks later they were pictured on the beach in each other’s arms and kissing.

Indeed, it soon became clear that they were a very serious item. And despite refusing to be drawn on the subject, on his regular breaks from tournaments he always returned to his home town to be by her side.

In July 2006 Hola magazine insisted that she was “becoming a very important rock in the life” of Nadal.

The key to their relationship, according to friends, is that she is very happy to stay in the background and is not interested in the limelight.

“She is a straightforward no nonsense girl not interested in all the glamour and fame,” said one.

Another friend Pedro Hernadez explained: ‘Raf and Xisca are both very shy and ordinary people who like to live simply.

“They are not at all interested in a celebrity lifestyle. They get together when the tournaments are over. That’s how Raf winds down.”

This week Nadal’s uncle and trainer, Toni Nadal, explained: “I guess a lot of girls will be upset to know the truth.

“My nephew always maintained he was single. It was a well-kept secret but actually his girlfriend is waiting for him in Mallorca.”

Voted one of the sexiest men on the tennis circuit being his girlfriend certainly can’t be the easiest of roles.

But Xisca, as the Spanish press simply know her, holds her own with an amazing figure and wavy curly dark hair.

The pair have been an item for three years and spend a lot of time in their home town of Manacor.

They are usually seen driving around in his convertible Mercedes and often go to the nearby beach of Porto Cristo, a village famous for its nearby caves.

Xisco is Nadal’s first true love and the pair are so close they spend a lot of time with each other’s families. Xisco is particularly close to Nadal’s grandmother.

In 2007 rumours among his huge female fanbase spread around that the pair had split up but this soon became apparently untrue. 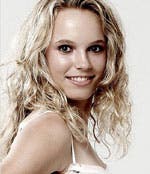 Most recently gossip suggested that he had become infatuated with Danish tennis sensation Caroline Wozniacki, 18.

According to Danish magazine Electra Bladet Nadal’s the pair had “become close friends” and recently started to date.

The relationship however, was completely denied by Nadal’s spokesman Benito Perez. He said: “We completely refute any of the allegations from start to finish.”

To further rubbish the rumours Xisca did something she has rarely done in the past: She turned up for his next few tournaments.

As well as a major tournament in Barcelona she was also at his side at the Italian open in Rome and again at Roland Garros in Paris last month when he took the title.

She may be beautiful, but Xisca is clearly no fool.