A SQUADRON of modern day buccaneers has been smashed by Andalucian police.

A sophisticated network of treasure and gold thieves was uncovered in the biggest operation of its kind in years.

Over a thousand missing archeological artifacts, 120 kilograms of gold and silver and 900,000 euros in cash were seized.

The police traced the lynchpin of the ring has to the remote Jaen town of La Carolina.

His family formed the link between the two branches of the smuggling empire.

One managed the theft and resale of historical artifacts; the other dealt in contraband precious metals.

Both branches were extremely well organized and armed. 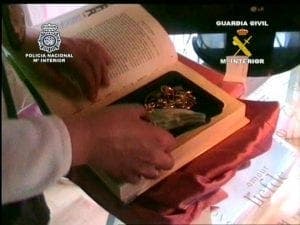 Seven guns were confiscated, including a sub machine gun.

On top of this, the police froze over one hundred bank accounts and deeds for nine properties.

The majority of the confiscated historical treasures date to the Roman period.

The artifacts were sent to professional hidden workshops where they were authenticated, restored and prepared for sale, either via the internet or to regular clients. 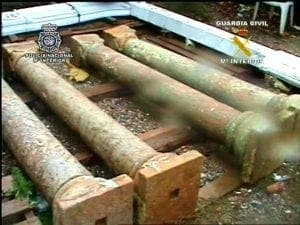 The ring’s gold and silver smuggling operation was no less sophisticated.

They were then recast and rebranded before being imported back into Spain for sale on the legal market, supported by fake certificates.

No tax was paid and the metals’ proof was often exaggerated.

In total, the police found 50 kilos of gold and 70 kilos of silver.