SITUATED just 15 kilometres apart, it is not surprising that there are so many ties between Morocco and Spain.

No more is this felt than in Andalucia, where the Moorish influence on the local cuisine dates back 1,300 years.

The Moors were here from 711 until 1492 and so unsurprisingly left an indelible mark on the area and in the kitchen.

Many of Andalucia’s signature dishes have their origins in Moorish culture, best known being the summer delicacy gazpacho.

The refreshing cold soup, made principally from tomato, garlic, vinegar and olive oil, emerged out of the nearly 800 years of Arabic rule in the region.

Curiously however, the tomato part of the dish, was actually introduced later when they first arrived from the Americas in the 15th century.

The Moroccan dish most people are familiar with, of course, is couscous, a delicacy of Berber origin. But Moroccan cuisine is actually extremely diverse, thanks to the country’s interaction with other cultures and nations.

In turn, the Moroccan influence on Andalucian cooking is widespread and not just limited to a few dishes.

Few people know that it was the Moors who first introduced many of the fruits, nuts and spices that thrive today in Spain.

The best example is the vast almond groves that were planted by the Moorish invaders when they settled here.

Today there are dozens of almond or marzipan-based cakes (or dulces) sold in pastelerias in Andalucia which compare to very similar products in Morocco.

One of the best known is a polvoron, while the marzipan-based yemas de San Leandro are a Moroccan recipe.

Moreover sugar cane and the use of sugar to preserve fruit also came from the Moors.

Of the many popular tapas, fried aubergines with honey is a fantastic example of how these ingredients have been adapted into local recipes and have cemented their place in the Andalucian diet.

Indeed, many of the dishes considered quintessentially Spanish would never have existed if the Moors had not lived here for so long.

Spain not only has the Moors to thank for many of its celebrated dishes, but also for bringing cumin, caraway, nutmeg, sesame, coriander, aniseed, mint and cinnamon to season them.

But finally, no article on the Moroccan influence on Spanish cuisine would be complete without a mention of the queen of all spices –saffron – which was introduced by the Arabs over a thousand years ago and still reign’s supreme over here.

In fact Spain is now the second largest saffron producer in the world, after Iran, and the spice – said to be worth its weight in gold – remains a popular flavouring and colour, especially in rice dishes such as paella.

While most commonly associated with Valencia, paella itself would be a very different dish without the rice and saffron that came from across the Straits.

In fact in many cases it is difficult to see where to draw the line between Spanish cuisine and its Moroccan origins.

One crucial separation however is the abundance of pork that is eaten in Andalucia in its many forms from jamon iberico to chorizo.

In stark contrast, in Morocco the consumption of pork is a religious taboo.

And in fact for centuries eating pork was actually a statement of Christian ethnicity or ‘cleanliness of blood’, because it was not eaten by Jews or Muslims.

This however makes the very popular pincho morunos an interesting melting pot of the two cultures combining pork with Moorish spices.

The dish consists of small cubes of meat threaded onto a skewer (or pincho) which are traditionally cooked over charcoal braziers.

Similar dishes exist in Morocco but for obvious reasons tend to be lamb or beef based.

So if you visit Morocco and Spain you may not immediately feel like you are eating the same things, but if you take a closer look at the main ingredients you might just find a surprising overlap.

While no-one is denying that Spain has come on leaps and bounds in recent years in the culinary world, the best of Spain – quite clearly – nearly always has a dash of Morocco. 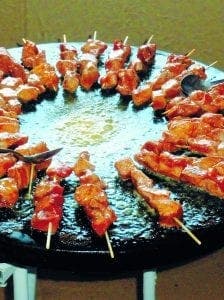 Instructions:
1. Mix all of the ingredients in a large bowl except the pork.
2. Add the meat cubes and stir to coat well.
3. Cover and refrigerate for several hours, stirring occasionally.
4. Thread the meat onto small skewers.
5. Grill (ideally over coals), until well browned but still juicy, basting with the marinade. 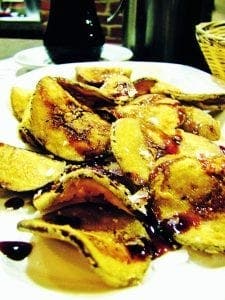 Instructions:
1. To make the batter, mix the flour, cumin and baking powder.
2. Add the salt and pepper then just enough water to make a very stiff batter.
3. Coat the slices of aubergine well and drop them straight into very hot oil.
4. Cook for a few minutes until golden brown and crisp, then remove with a slotted spoon and drain on some kitchen roll.
5. Serve on a plate straight away with a generous coating of the honey.