WHETHER you prefer them roasted, mashed or as chips, life without the humble potato just wouldn’t be the same.

And since their introduction to Europe in the second half of the 16th Century – following the Spanish conquest of the Inca Empire – our love affair with the ‘spud’ or ‘tat’ has gone from strength to strength. 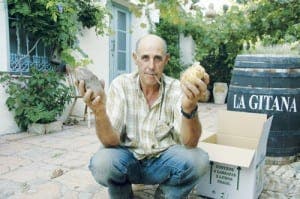 Originating in Peru, the potato crop is the fourth largest in the world, boasting no fewer than five thousand different varieties.

The starchy staple is well known as a good source of carbohydrate and has even been credited with helping to prevent colon cancer.

It’s the time of year when every allotment and garden grower around Andalucia hoes up hundreds of spuds and works out how on earth they are going to be stored and kept. 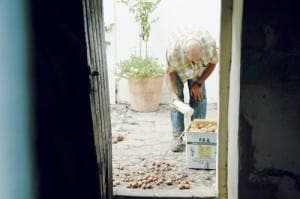 Here the Olive Press looks at the work that goes into harvesting the potatoes, with a local gardener Paco Moreno from Arriate, and watches the meticulous selection process that determines which specimens are suitable for storage.

Potatoes are sorted, the difference between a good and bad potato is vital, while the potatoes are boxed and sprinkled with a special powder which helps to ward off blight

AT this time of year there is no shortage of deliciously fresh fruit and vegetables available throughout Andalucia.

But with many of us often left with more than we can reasonably eat, what are the best ways to keep the wastage to a minimum?

Follow these instructions and your five-a-day will last for weeks.

Tomatoes
To make sun-dried tomatoes, cut some ripe tomatoes into four wedges and remove the seeds. Sprinkle with salt and herbs and spread them onto baking trays. Cover them with muslin and leave to dry in the fresh air. Bring the trays in before it gets dark to avoid the wedges reabsorbing moisture. Drying can take two to three days (turn occasionally to ensure no soggy patches).

Plums, peaches & pears
These all make nice jams, but they can also be bottled. This involves heating a jar, fruit and some liquid, all at the same time in almost boiling water, then tightening the lid before everything cools down. Warning: This can potentially make you ill if you do it wrong, so be careful.

Grapes & figs
Besides drying them, this is a good opportunity to practice the lost art of ‘fruit leather’. Combine a plentiful fruit, such as grapes, with a smaller amount of something with a stronger flavour, such as plums, then slowly simmer down to a paste. Sift out the pips, skins etc and further reduce the puree, before pouring it into well-oiled trays for drying.

Cucumbers
These can be pickled. Slice them thinly and pour over a mixture of white wine vinegar, dill, peppercorns and salt.

The man who moved monasteries: How an American art dealer bought up Spain’s Medieval heritage and shipped it back home

Nearly half of people in Spain favour compulsory COVID-19 vaccinations