The Olive Press sent JAMES BRYCE to the highest point in continental Spain, Mulhacen, in Granada, which according to legend is the final resting place of a Muslim monarch

THE view stretched as far as the eye could see and offered a spectacular 360 degree vista that took in half of Andalucia.

To the north-west the urban sprawl of Granada spread out like marbles emptied from a bag, while to the south, the distant peaks of Morocco’s Rif Mountains were betrayed by a line of cloud that lingered in the haze.

It had been a hard slog to the top of Mulhacen – the Iberian Peninsula’s tallest mountain – but the panorama offered the perfect pay-off.

The imposing 3,482m (11,413 feet) peak lies at the western end of the Sierra Nevada National Park, Europe’s second biggest mountain range, and is something of a rite of passage for lovers of the great outdoors.

The mountain takes its name from Abu I-Hasan Ali (Muley Hacen in Spanish), the penultimate Muslim King of Granada in the 15th century who, according to legend, was buried at the summit. 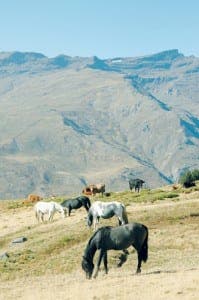 With the exception of growing a beard in the spirit of the great explorers, my preparation for the challenge was extremely limited and relied heavily on a combination of youth and enthusiasm to carry me to the top.

Despite considering myself to be relatively fit, a slight sense of unease gnawed away in the back of my mind about my ability to complete the climb.

After all, Mulhacen claimed the lives of three Britons in 2006 after extreme weather conditions left them stranded, with all three dying of hyperthermia before help could arrive.

What’s more, my only previous mountain experience had been a trip up Mount Snowdon in Wales last year, which at just 1,085m – or a third the size – was a far easier prospect.

Fortunately, I was aided in the task by one of the region’s most experienced guides, Martin Riley.

It is vital to use a guide to get the most out of the trip and the amiable Lancastrian runs the locally-based walking company The Life of Riley, based in Lanjaron.

One of Spain’s only fully-qualified International Mountain Leaders (IML), he was the first British guide to become a member of the Spanish Mountain Guides Association.

This all left me feeling much more comfortable about the task ahead as we struck out from a car park at Hoya del Portillo, along a path through a patch of pine forest.

Our target for the afternoon was the Poqueira mountain refuge, perched at 2,500m and accessed via a relatively comfortable eight kilometre walk up the Poqueira Valley.

The plan was to spend the night there before tackling the tough ascent in the morning, leaving ample time to make the return trip in daylight. 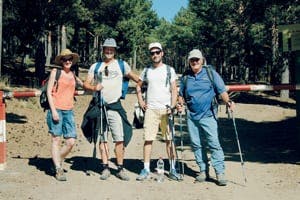 The walk proved to be extremely pleasant as we passed grazing cattle and horses and admired the views across the valley to the range’s second highest peak, Veleta – set against a vast, cloudless sky.

For the second half of the walk to the refuge we followed a gravel road which winds its way through the mountains en route to Granada, and even passes within a few hundred metres of Mulhacen’s summit.

The track has been closed to all but those with a special permit since the area was declared a national park in 1999, but remains a popular route with mountain bikers.

Our late-afternoon arrival at the 87-bunk refuge allowed us to sit back and take in the view down the valley and watch as shadows created by the rapidly setting sun consumed it.

“The area is full of history,” explained Martin, who has lived in Spain for six years having previously managed a Countryside Ranger service in the UK.

“It was the scene of a guerrilla war in the 1940s and early 1950s against Franco’s forces and there are gun emplacements which are still intact from that time.” 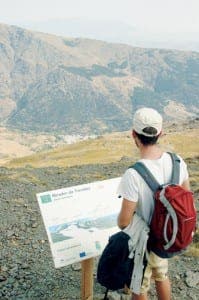 Once the sun had gone down the temperature dropped dramatically and we were glad to be able to retreat inside to a hearty four-course meal before getting an early night in the communal dorm, all for just 30 euros a head.

As it was a Thursday night it was only a quarter full so we got a surprisingly good night’s sleep (ear-plugs and sleeping sheets are available for just three euros at reception if required).

The next morning began with a steady climb up through the higher reaches of the valley, requiring a greater level of concentration due to the loose rocks underfoot.

On all sides there was evidence of past glacial activity, all of which provided a humbling reminder of the raw power of mother nature and the importance of treating it with respect.

The path then opened out onto a grassy stretch which offered some light relief from the muted grey slate.

Before the final push to the summit there was time for a brief pause for lunch at the primitive Vivac refuge, which provides wooden boards for up to 12 people to sleep on.

We were joined by a family of wild mountain goats – a common site on this part of the mountain – although they seemed totally uninterested in us, apparently quite used to the presence of humans.

Suitably rested and refuelled, it was time for the final ascent, undoubtedly the toughest part of the walk.

It was meant to take an hour, but we did it in just 48 minutes, which pleased Martin no end.

It was mostly just a case of focussing on your feet and not looking too far ahead as you clambered up a path worn into the rock-scree on the steep western face.

It is a punishing climb that requires concentration and determination in equal measure but the sense of achievement upon reaching the summit makes it all worthwhile.

A view that truly is fit for a king. 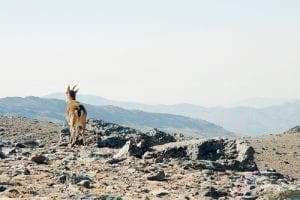 It was the next five hours however, that were to prove the most tricky. Although mostly descending, the path was anything but easy and there were plenty of places to twist your ankle.

By the time we got in the car we were all exhausted. I vowed I was not even going to walk to the shops the next day… and I can tell you I wouldn’t have been able to if I tried.

The Olive Press walked with Martin Riley of The Life of Riley
For more information contact martin@thelifeofriley.eu.com or call (0034) 696 354 824