LET’S be honest – the words ‘Andalucia’ and ‘vegan’ don’t go particularly well together.

After all, the region – for reasons deeply embedded in Spanish history – is known throughout the world for its pork dishes.

In post-Reconquista Spain, Jews and Muslims gorged on ham and sausages, forbidden under their old religions, in order to prove to the Inquisition they’d converted to Christianity. And the habit has continued to the present day.

“Many people in Spain think jamon is not meat,” explains a Granada-based vegan in her blog, Happy Vegan.

“And many people call themselves vegetarian, but they eat fish or ham,” she added.

So, how would I fare on a two-month sojourn in meaty Andalucia as someone who doesn’t only avoid jamon, but strives to avoid all animal products, including dairy?

The night I arrived in Ronda, my new home, I confidently ordered some gazpacho from a bar. Surely this famous raw vegetable soup wouldn’t contain anything untoward.

I was wrong. As I spooned it into my mouth, I noticed some chunks – which I hoped were croutons.

Actually, they were squares of tuna. It turned out that in Andalucia, it’s common to add fish or ham to vegetable-based dishes.

Although the chef did shuffle off and make me a tuna-free version, understandably this experience put me off eating out.

Instead I concentrated my efforts on making sure I had the right ingredients in my own kitchen.

I was glad to discover they sold soya milk, as well as no fewer than four different types of non-dairy dessert, at my local supermarket Mercadona – a definite improvement on when I was last living in Spain in 2003.

Grabbing the hummus and olive-oil margarine from the shelves, I started planning the vegan sandwiches I’d take to work.

Down the road at rival SuperSol I was thrilled to find some tofu – which I’d soon be marinating and stir-frying for a tasty dinner. 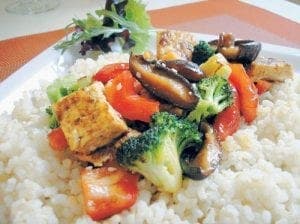 However, the range of non-animal-based foods was undoubtedly limited.

“It’s true that in Spain we’re not at the same level as other European countries – especially the UK – when it comes to the vegan products on offer,” said David Roman from the Spanish Vegetarian Union, who has been vegan for 15 years.

“However in health food shops there’s a good variety, and nowadays you can even get several types of vegan cheese,” he added.

With this in mind, I wondered if I would also find health foods such as meat-free sausages and burgers, more unusual grains like quinoa and millet, and other vitamin-packed foods such as pumpkin seeds and black-eyed beans.

In Ronda’s health shop I was thrilled to find a whole range of wholesome options such as veggie mince for making meatless bolognese sauce and lasagne, soya cream cheese and chilled burgers made from seitan, a wheat-based meat substitute – although I was shocked to see a small packet of pumpkin seeds cost four euros.

Vegetarian chef Olga Maria Neves Serreira explained that she was spoilt for choice in her home town of Orgiva, sometimes dubbed ‘the Glastonbury of Spain’.

“We can’t complain here, because it is a very alternative place with lots of foreigners. There are five excellent health food shops.

“As for the rest of the country, vegan foods are almost non-existent apart from in big cities.

“The movement is only just starting in Spain,” explained Olga, who also runs raw chocolate-making workshops.

“People don’t understand that they can live healthy lives without meat. Their minds are very closed. They eat a lot of unhealthy foods like white sugar and white bread.

“Hopefully with time and seeing an improvement in their health, Spaniards might start to make changes to their diets.”

Certainly one positive aspect of shopping here is the amount of fabulous fruit and vegetables on offer – thanks to the near-permanent Andalucian sunshine.

I armed myself with ingredients such as fresh basil, mushrooms, avocados, tomatoes, onions and beans and set about making classic dishes like fresh pesto (with crushed cashew nuts instead of parmesan), guacamole and vegetable paella.

Venturing out once more, I was delighted to discover a few vegan and vegetarian restaurants in Andalucia, making eating out a real possibility again.

The Tetería Sin Lin in Almeria offers vegetarian cookery classes where you can learn to make soya dulce de leche and veggie Japanese spring rolls – as well as eating them of course.

Other vegetarian estaurants exist in Sevilla, Cordoba and Malaga. There is even a purely vegan one in Marbella (below). 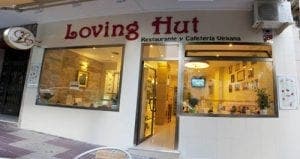 Back in Ronda – which has no vegetarian eatery – I knew I had to find ways of eating out.

With a bit of research, I discovered that while most dishes were off-limits, there were plenty of tapas with no added animal products which meant I could enjoy an evening out with friends without going hungry.

I’d just have to make sure I asked for these dishes sin carne and sin pescado.

FACT FILE: What is veganism?

Vegans do not eat meat (red or white), fish, dairy products or eggs.

Many vegans also avoid using animal products such as leather, beeswax and bone china, and beauty products tested on animals.

Reasons for veganism are religion, health, environment and ethics.

The protein in a vegan diet comes from nuts and seeds, pulses such as beans, chick peas and lentils, soya products like tofu, tempeh and soya milk, and meat substitutes made from vegetable protein.