SPANISH cyclist Alberto Contador has been stripped of his Tour de France title – and banned for two years – having tested positive for performance-enhancing steroid clenbuterol.

Contador failed the doping test in September 2010, shortly after winning the Tour de France for the third time – with his other two wins in 2007 and 2009.

The 29-year-old always maintained the clenbuterol was present because he had eaten contaminated meat.

And while the Spanish Cycling Federation proposed a one-year ban followed by an acquittal, the International Cycling Union (UCI) and the World Anti-Doping Agency both appealed to the court for a stronger penalty.

“This is a sad day for our sport,” said the UCI president. “Some may think of it as a victory, but that is not at all the case.

“There are no winners when it comes to the issue of doping.” 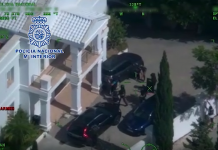 WATCH: Two Britons and an Irishman arrested for punishment shooting of Brit in Spain’s Marbella