A BRITISH expat has spoken of the heartbreaking moment she put down her one year old puppy after he suffered kidney failure allegedly linked to Mercadona dog food.

Dog lover Nicola Lambert, who lives on the Costa del Sol, insists Ricky died as a result of eating the controversial own brand Compy.

He was put down just five months after he was rescued from an animal charity.

“We were initially fostering him but we fell in love with him and in October decided to adopt him,” she explained.

The problems began when Lambert and her partner went away at Christmas and he was looked after by friends.

“On our return both my hubby and I commented on how fat he looked and that he had put lots of weight on.

“As the week past we felt he had lost his Mojo; didn’t want to go outside to the loo, play or in general do anything and he was consuming a lot of water.

“We took him to the vet and discovered that in those few days he had become very ill and anaemic and although we did everything possible, test after test, specialist scans etc we found that his kidney function had basically stopped.

“After a lot of tears we decided that he needed to go to sleep so just five months after we got him and at just one year old our baby boy went to sleep for the last time.”

She continued: “The vet was confused how such a young dog could have this problem and although I had heard before that sometimes the food we give our animals is not good for them it never crossed my mind as being possible until now.”

“I am devastated that I could have killed my dog because of feeding him this food.” 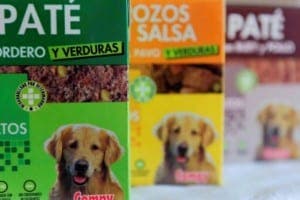 Shockingly, this is just one of many cases that are now flooding Spain as dozens of pet owners have come forward from the Costa del Sol, Murcia, Alicante and Almeria to reveal their dogs have suffered kidney failure after eating Mercadona’s Compy dog food.

The dog food – which comes in chunks of beef or as ‘a pate’ – recently switched from tins to cartons.

“Some owners like me have seen the problem since the food changed from being in a tin to a carton,” added bar owner John Beachcomber, who launched a Facebook page to warn owners after his friend’s beloved Labrador-cross Goldie had to be put on a drip five hours a day.

“I don’t want to be scaremongering but what worries me is that if it is not the food but the carton that is to blame them what else is the carton used for. We need answers.”

Meanwhile a spokesman for Spain’s largest supermarket chain confirmed that it was taking the matter very seriously and two types of its own brand Compy pet food had been withdrawn from the shelves in Almeria ‘as a precaution.’

The products are now being analysed by its technicians to see if there is a connection between the food and dogs suffering kidney failure.

“Technicians from our suppliers are currently analysing the products in their laboratories. explained spokesman Jorge Romero.

“At this stage we have only removed the product as a precaution and we are waiting for the results of the analysis. We do not know with any certainty if the food is to blame.”

The results are expected at the end of the week.