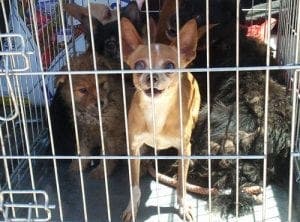 AN animal charity is racing against time to save nearly 40 dogs that face being put down after being found in squalid conditions.

Animal rescuers were left horrified after finding 38 dogs – including pregnant females – living alongside the rotting corpses of eight dogs that had died up to two months earlier.

The dogs, many of which had never been outside, were found after Priego de Cordoba Town Hall ordered the eviction of tenants from a house after the owner complained about rubbish on the property.

The town hall is legally obliged to keep these dogs for 10 days, after which they will be put down if they are not re-housed.

Now local animal charity Mascotas de Priego is asking people to help save the dogs by donating money or offering them a home.

“What was found in the house is beyond comprehension.

“Eight of the dogs had been dead for up to two months. They were found in an advanced state of decomposition, covered in flies and worms, in the living space of the other dogs.

“As they have not had much human contact, the dogs were very scared, and it took four hours to collect them all, through the unbearable stench of faeces and urine.

“All are malnourished and the majority have skin problems having lived in an overcrowded, insect-ridden, disease-ridden environment for so long,” he added.

“The association is desperate for help in the form of funding, adoption or foster homes.

“I appreciate that people have many other things to worry about at the moment, but if anyone can help in any way, it would make a huge difference.

“It would save their lives.”

Anthony Piovesan - 7 Feb, 2023 @ 18:30
On the would-be birthday of missing Amy Fitzpatrick her ‘broken’ family have one wish. Instead of celebrating what would have been Amy's 31st birthday today,...