WHEN Cadiz Town Hall published a list of all the towns and villages in the province recently oddly Alcala del Valle was not even on it.

“Understandably as a hotelier here I was concerned and called up to say they had missed the village off,” explained Siska Oosterling who runs Hotel Erriza with her husband Hans Wolffenbuttel.

“First they insisted it was in Malaga and not Cadiz, but when I argued with them they agreed to come back to me.

“Eventually they called back hours later to apologise and now we are listed,” she said.

“It is funny; people, including the authorities, don’t seem to know the village is here.”

This charming, if forgotten, place situated in the far north east corner of Cadiz right on the border with Malaga and just 24km from Ronda, is of Muslim origin, but there is evidence that a settlement has existed here since prehistoric times.

In particular, traces of megalithic culture can be found in the Dolmenes del Tomillo.

Meanwhile the name Alcala originates from the Moorish word for castle, which is no longer standing and is now the site of Hotel Erriza and the adjacent municipal swimming pool.

The village, while not exactly pretty, is ideally situated in the heart of Andalucia and within easy reach of other towns, making it a great base.

There is also a lot to do in the surrounding countryside such as biking, hiking, and horse riding.

And an absolute must-see is the Canos Santo Convent, built in the 16th century in honour of the virgin who appeared to a shepherd in 1512.

Even more impressive than the building is the stunning scenery that can be seen from the high vantage point which is also where the villagers flood to for the annual romeria on May 1.

From the outside Alcala looks very much like many of the other white villages in the area but it is often passed over by tourists in favour of its more spectacular neighbour, Setenil de las Bodegas.

It is in fairness a little rough round the edges, but what it lacks in polish it makes up for in atmosphere.

And equally the people are very much ‘salt of the earth’ with a ‘what you see is what you get’ attitude.

Proudly working class, almost to a man, I even saw several people on a Sunday morning strolling around in their pyjamas – but hey, that is no crime.

It certainly has a very different feel than many other local spots and is about as far removed from nearby Ronda as Barcelona is to Baghdad.

Furthermore it is fast becoming known as something of a party town.

The distinct lack of tourism gives it an authentic feel that is lost in some of the other more popular villages around.

“This is true authentic Spain,” adds Siska, a journalist from Amsterdam.

“And it is not a ‘sleepy village’, it is very festive and there is always something going on.

“At the weekends the young people from villages from a long way away come here for their nights out.”

Indeed the town, with a population of around 5,300, boasts around 30 bars and restaurants.

It is no surprise that in 2010 the village put itself forward as one of the ‘most fun places’ in Spain as part of Antena 3’s Megaplayback competition, which saw 1,000 residents make a music video showcasing their pueblo. 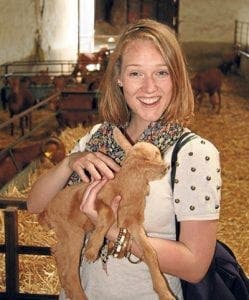 Interestingly, in contrast to the vibrant social scene, the way of life is very agricultural and the surrounding countryside makes you really feel you are in the middle of nature.

It is not unusual to find a herd of goats ahead of you on the roads, and see residents working the land.

There is also an enormous private bull-breeding finca outside the town where some of Spain’s biggest bullfighters regularly come to practice.

These allegedly include Jesulin, Fran Rivera and Javier Conde, the husband of flamenco star Estrella Morente.

This is a fact now well known to the owners of neighbouring boutique hotel Cortijo El Guarda, also run by a Dutch couple, Miranda Lobel and Hans Lucassen.

“When we were finishing work on the hotel last year, a man came in and asked to have a look around as he had always liked the place,” explains Miranda.

“Suddenly all the workmen stopped what they were doing and ran over to take pictures.

“They were so excited, I didn’t know what was going on and it turned out it was Javier Conde.

“He was just really normal and was chatting with the guys,” she added.

The main employer in the village however is an asparagus cooperative, which sells the vegetable to France and Holland, and employs around 70 people.

The people are obviously very proud of what they have on offer and keen to show it off to visitors.

As soon as I expressed a slight interest in the asparagus co-op, one local, Jose Pulido Dorado, who has lived in Alcala all his life, ushered me round.

I’m still not sure if he actually worked there or just in the petrol station next door, but he knew everyone and everything and made a knowledgeable guide.

Meanwhile the rows of women dressed in blue giggled at the idea of having a journalist writing about what they do.

This friendliness towards strangers in a large part comes on account of the fact it is very much an emigrant village.

With a lack of industry there the residents are forced to travel to find work.

For several months each year a lot of the men actually go abroad to do seasonal jobs such as fruit picking and in the summer months Alcala is mainly populated with women.

“There is no work here so everybody has to leave,” adds Siska.

“There are times when the village is nearly just women and children.

“And more recently some of the women have been leaving to find work as well so there are children and grandparents. It is difficult.

“But it gives the town another dimension. The people have lived all over and the town is surprisingly multi-lingual and very open minded.

“People understand what it is like to be in a foreign place and so they are very welcoming.”

Miranda from La Guarda agrees: “Times are difficult but they still try to live a happy life.”

And this certainly shows in both the locals and the few expats who have made this out of the way village their home.

“When I talk about Alcala I feel so proud,” she continues. “I have just fallen in love with the place, the people and our life here.

“Where else in the world can you be somewhere so rural and tranquil with just the birds and butterflies, and at the same time so close to the beach and other cities.”

Staff Reporter - 1 Dec, 2022 @ 13:14
If you're looking for a party destination that will never disappoint, then you need to check out our travel guide! We have compiled a...