Involving much pomp, colour and noise the annual Moors and Christians festival in June is one not to be missed.

Taking place this year from June 15 to 17, the celebrations will see seven different armies marching through the town.

The armies, known as kabilas, will man their fortresses in the village; with music, bars, food and costumes.

There are some exhibitions and activities on the playa, but the main bash, including a medieval market in the main square, is in the village where the bedlam continues with fresh explosions, bangs, firecrackers, music, live bands, thunder-flashes and musketry.

The slightly deafened soldiers and courtesans will finally be participating in the most extraordinary parade on Sunday evening with gorgeous costumes, interspaced with large brass bands and horse riders.

The Moors and Christians event celebrates the story of Mojacar’s defeat in 1488 and how the two sides managed to turn the battle into a companionable ‘draw’.

The Christian Kings, as they are known in Spain, were camped on the doorstep of the fortified town.

They had broken through the Moorish lines and sacked the next door town of Vera.

The Moorish captain of Mojacar sued for peace by saying ‘we are as Spanish as you’.

The romantic version has it that his argument fell on fertile ground and there’s an old plaque at the Mojacar fountain to prove it. 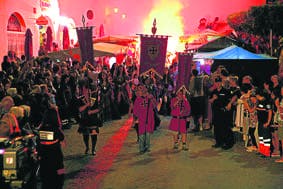