By Eloise Horsfield and Helen Pierpoint

THEY roam Andalucia’s beaches in the searing midday heat, offering trinkets, clothes and counterfeit gear to sunbathers – often making as little as €10 a day.

Heralding from north Africa and sub-Saharan countries, the tens of thousands of ‘looky looky’ men, as they are pejoratively known, lead precarious lifestyles, living on the very edge of society.

Sending the vast majority of their earnings to wives and children in Africa, they are usually left with little to spare and are forced to live in overcrowded squats or small flats, usually two or three to a room.

Yet, despite being treated with absolute disdain by many holidaymakers – and sometimes even physically attacked – they are rarely less than good humoured, sporting smiles and gentle demeanours throughout their long hot days.

Indeed, it comes as a big surprise to many beach bar owners and tourists alike, that this month two Senegalese men are about to go on trial for allegedly attacking three police officers in Granada last year.

The pair are facing a one-and a-half year prison sentences and a €500 fine and deportation for allegedly putting the officers in hospital and even damaging their van. 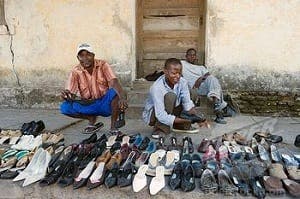 The men had been standing guard to protect ‘manteros’ who are so-called because they display their merchandise on mantas (blankets) which they can gather up swiftly in order to make a hasty exit if the heavies approach.

But, this sort of incident is extremely rare, and most of the time the hawkers are good natured and accept it when their goods are seized.

Of course, we must remember, these men are flogging their goods – often picked up from wholesale stores – without licences, often without the right to even be in Spain.

Many of these goods are now counterfeited and, as of this year, it has become more serious to download and sell fake merchandise and pirated CDs.

Under Spanish law, street sellers are required to obtain a licence from their town hall before offering merchandise to the public.

“But each town hall has its own exact rules and it’s at a local level the issue needs to be controlled,” says a spokesman from Spain’s National Consumer Institute.

“It has nothing to do with us,” confirms a central government spokesman.

Local crackdowns however have had various degrees of success.

Over in Murcia, Cartagena Town Hall has recently seized over a thousand articles through out May and June – including pirated DVDs, fake designer clothes, perfumes, watches and sunglasses. https://www.globosurfer.com/best-polarized-sunglasses/

Meanwhile, if local police – who work with the town halls – find an unlicenced vendor is also living in Spain illegally, their file will be passed to the Guardia Civil.

“It is them who deal with illegal immigrants and deportation,” says a Nerja Town Hall spokesman.

A Benalmadena policeman said: “Regarding expulsion, some immigrants use the law when they want to go back to their countries.

They actually ask to be deported so they get their plane ticket paid for, even though the law should only be used against illegal immigrants who are minors.”

Anecdotal evidence, however, suggests police attempts to deal with hawkers are somewhat half hearted, with one English teacher describing the ‘Laurel and Hardy’ sequence she saw near Playa Venus in Marbella.

“I watched a policeman on a scooter skid to a halt by a group of them,” says Sally Adams, 31, who lives in the Genal Valley. “They all scattered and ran, some dropping their stuff on the way. The scooter gave chase and finally cornered one guy. 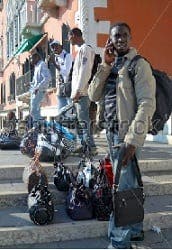 “The policeman could have quite easily arrested him – he had him by the arm but was still on his scooter – but he hesitated too long and the guy got away again.

“Clearly he was not that bothered about catching him.”

Other witnesses report seeing police officers chasing the sellers as far as the beach, then giving up once their targets disappeared onto the unforgiving, hot sand.

This is confirmed by talking to some of the men themselves.

“I never have any trouble from the town hall,” grins 28-yearold Khalifa, a Moroccan who lives in Malaga and spends his days traipsing along Playa de la Rada in Estepona selling dresses.

“I buy the clothes here in Spain where cheap, and sell them here and in northern Morocco,” he explains.

“I go backwards and forwards between the two countries, spending about two weeks in each.”

“We were receiving complaints from local business. I don’t know how many though,” a town hall spokesman explains.

While there have been no arrests so far, 500 articles have been seized in a matter of weeks – mostly fake Ray-Ban sunglasses, but also counterfeit Ralph Lauren polo shirts and even massage equipment.

But while some businesses are obviously put out by the presence of hawkers – with one chiringito owner in Estepona complaining ‘I pay loads of taxes and they don’t’ – the Olive Press found most bar owners to be tolerant.

“We haven’t got a problem with them,” said Georgia Kirby who says eight hawkers per day come into her parents’ bar, Olas, on Playa
Burriana in Nerja – a tourist hub where much of Nerja Town Halls’ efforts are being targeted.

“The only ones that annoy us are the ones playing music. We are a sports bar and they end to come in just as the football is about to start,” she added.

“I’m fine with them,” she said. “They are really nice people and I’m happy for them to come in.

“I’m surprised about the crackdown by Nerja Town Hall – I’ve been on holiday in places where it is far worse.”

One San Pedro woman, who does not wish to be named, feels so protective of the hawkers that she even hides them in the attic of her seafront restaurant.

“I hide them from the police and give them drinks. They’re not doing any harm,” she says.

“Local police are putting such a clamp on them. It’s like a fox hunt and I feel sorry for them. They have to jump in bushes and throw their merchandise in bins,” she says.

Again, in the hawkers’ defence, Dutch journalist Caroline van Soelen – who is currently making a TV documentary on them – says many actually held down proper jobs in their previous country before heading to Spain. 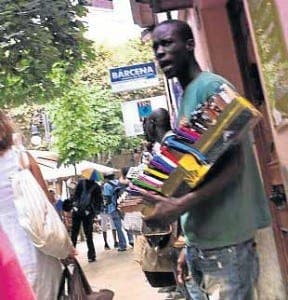 “They are actually operating illegally through lack of choice,” she explains.

“They come here for a better life, but it ends up being a worse one.”

“Many of them simply want to be legal,” she said.

“One guy said he used to be a taxi driver in Ghana and wanted to do the same work here. The Spanish authorities told him he’d be able to get a licence within a year – but six years later he is still waiting.”

She continued: “In general they feel sad about how they are treated. Many people ignore them completely.

“The thing I find most upsetting is that they don’t see their families.”

Indeed, Abdou, who sells handbags on Benalmadena beach, has not seen his family in Gambia for six long years.

“I don’t want to go back until I have made some money,” he says, holding back tears.

But once he has paid the rent on the flat he shares with four other sellers, plus food, Abdou – whose wares are regularly confiscated by the police  – has nothing left to send home, let alone travel there.

Khalifa, however, has managed to find his own solution to this particular problem.

“I have a wife in Morocco, and a girlfriend with two children in Spain,” says the 28-yearold.

It is then, no surprise, that he currently enjoys his life alternating between his native village near Marrakesh and the bright lights of the Costa del Sol.