A SCOTTISH expat has become embroiled in a legal battle after removing a Franco-era plaque from his garden with a hammer.

Clifford Torrents, 59, removed the 1950s plaque (below) from his house near Lugo, in Galicia, after a ‘verbal agreement’ with a town hall councillor.

The sign reads ‘Inaugurated on 24.05.1953 with Francisco Franco reigning and D. Jose Maria Lopez as mayor’.

But when mayor Jose Manuel Brana found out Torrents had removed the plaque, he filed a denuncia against him.

Torrents, whose father was a Republican soldier, said he would not have bought his house in 2009 if he had noticed the plaque, which sat next to a fountain in its garden.

Clifford insisted that before the last town hall election, Brana visited each house in the area asking the residents if they wanted the plaque removed – which most did.

So while the mayor was on holiday, he asked a town councillor if he could take matters into his own hands.

He said the councillor had agreed for him to remove it given that the town hall did not have the money to do the job themselves.

“We shook hands and drank a toast to it,” he insisted. “In my country, that is the same as confirming a contract.

Now the mayor is demanding the plaque be reinstated through the courts.

“I had told him we were looking into the matter,” he said. “It was not for this Englishman to remove it without permission.”

“It is ridiculous,” said Clifford. “But considering what happened to Garzon, and Francisco Camps, and what happened and with Ecce Homo, nothing in this country surprises me. 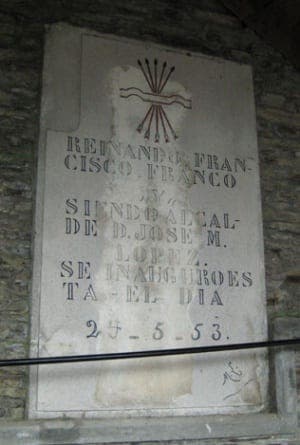