VELEZ Malaga is slashing its Christmas lighting budget to save much-needed cash this winter.

The Christmas lights in Velez Malaga and Torre del Mar will only be switched on for three hours a day between December 5 and January 5 – with the exception of Christmas Eve, New Year’s Eve and January 5 when they will remain on until the early hours.

The town hall has also vowed to save €74,000 per year by not lighting up the town’s main monuments and green areas overnight during the rest of the year.

At the Maria Zambrano park, lights will be turned off at 11pm instead of 1am and further checks will be brought in to ensure town hall buildings and schools are not wasting electricity withChristmas lights.

Meanwhile PSOE have slammed Malaga’s PP-run City Hall for spending €534,000 on Christmas lights each year, compared to €50,000 and €70,000 spent by Zaragoza and Valencia respectively.

The socialists also argued that the shops benefitting from the lights should bear some of the costs. 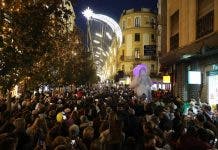 Cordoba in Spain’s Andalucia slammed for setting aside €1.6 million for Christmas show amid COVID-19 recession