WE’VE all seen them. Cloudy trails streaking across the sky pumped out the back of jet planes.

However, most of us would never give them a second thought – after all vapour trails coming out the back of aeroplanes is the norm right? Well, maybe not.

Normally a sceptic by nature, the immense response the Olive Press’s post bag received following a set of photos we printed in the paper a month ago has made me think again.

While some asserted that these strange patterns seen over the Costa del Sol were nothing more than condensation trails produced by planes flying at a certain height, there was an equally strong response insisting that there is something more sinister going on.

Rather than being contrails, many of our readers believe these misty lines are in fact chemtrails – the result of planes spraying the atmosphere with a combination of toxic chemicals.

And after a few hour’s research on the internet, I can see that this is hardly an uncommon opinion.

It seems many people believe governments around the world are secretly using planes to spray the atmosphere with aluminium, barium and strontium in order to deflect the sun’s rays and tackle global warming.

They point to the fact that these trails seem to spread out across the sky from horizon to horizon and then to settle, while contrails should disappear within a few minutes.

However, conspiracy theories are all very well, but is there any proof – or even strong evidence – that this is going on?

My first stop is US documentary What in the World are they Spraying, which several of our readers have pointed me towards.

In the programme by journalist and ‘activist’ Michael J Murphy the views expressed range from the plausible (chemtrails are part of projects to tackle climate change) to the faintly ridiculous (this form of geo-engineering is part of an evil government conspiracy to control the global population and create a new world order). 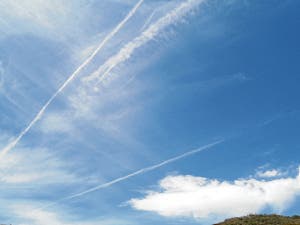 Admittedly, some of it looks rather convincing.

Soil readings showing elevated levels of aluminium and barium – sometimes up to 61 times greater than is considered ‘safe’ – and scientists talking about the benefits of geo-engineering (controlling the weather) do make you think that it’s far from impossible that chemtrails exist, particularly in the US.

However, I still can’t shake off the feeling this is just scaremongering – another barmy conspiracy theory with a limited following.

After all, the so-called experts in the documentary include a local dentist, a former Arizona senator (screeching hysterically about how chemtrails are causing Alzheimer’s), an author and a guy with a PhD in zoology. Not quite the scientific bigwigs I was hoping for.

And anyway, what does this all mean for the Costa del Sol? Luckily for me (as I’m still no closer to finding any answers), there is no shortage of people happy to share their thoughts on this phenomenon.

Torrox resident Liz Casey, 54, has been researching chemtrails for the past five years and has steadily become convinced that they are more than just a wild conspiracy theory.

“These trails just aren’t normal,” she tells me. “I know what a contrail looks like, and they don’t create these criss-cross zig-zag patterns that we see daily in the Costa del Sol skies.”

The expat, who has lived in Spain for 12 years, adds: “You just have to look at the mass of research done on chemtrails – including soil tests and water tests – you’ll see that there are heavy amounts of chemicals falling on the earth.”

However, Phil Spiers, 44, who runs local environmental magazine La Chispa, based in Andalucia, believes that the internet has actually done us more harm than good when it comes to the chemtrails v contrails debate.

“There is so much stuff about chemtrails floating about on the web that no one is approaching the issue from the right angle and it’s just causing hysteria,” he says.

“It’s become all too easy for people to decide on their argument and then dig out some information to back it up.

“A lot of the stuff on the internet is flawed, and some is just plain made up.”

Spiers points out that while governments are certainly experimenting with weather-changing projects, there is no solid evidence that chemtrails exist.

He points out that many of the soil samples taken as evidence come from areas where pollution is a serious problem anyway, which may account for the high levels of chemicals.

“So much of this so-called evidence can be pulled apart,” he adds. “Yes, there’s a lot of pollution and there are chemicals in the soil that shouldn’t be there but this doesn’t mean they are caused by chemtrails.

“By focusing on this conspiracy theory that has no solid basis, all we’re doing is drawing attention away from the issues that really matter – things like melting ice caps and climate change.”

However, other theorists argue that there is in fact an abundance of scientific evidence to show chemtrails exist.

Medical anthropologist Dr Graham Hutt has studied these trails for several years in many different locations around the Mediterranean and insists that they are more than simply airplane vapour.

He says: “Researchers – including myself – have taken air samples and noted (with high-powered microscopy), high concentrations of aluminium particles of around 12 microns in size, often along with other toxic metals and chemicals.

“Other researchers have noted live virus’s in samples.”

What’s more, the scientist refutes claims that these strange cloud creations are nothing more than normal vapour trails emanating from commercial flights.

“This can easily be shown to be false because we observe spraying aircraft running four abreast, and then returning to criss-cross together at 90 degrees to create these cloud formations,” he adds.

“Weather experts I consulted say there is no way weather conditions can account for the phenomena.” 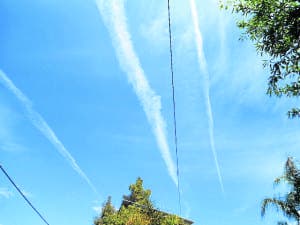 Back in 2002, Liberal Democrat MP Norman Baker released a MoD document showing that the UK government conducted a series of secret germ warfare tests on the public between 1940 and 1979.

These included releasing potentially dangerous chemicals and micro-organisms over vast areas of the population in Surrey and in the north of England.

Conspiracy theorists point to this example as a reason why we shouldn’t trust that European governments aren’t doing something similar now.

This seems fair enough, but in my mind the evidence is inconclusive.

Yes our soils contain chemicals, yes there are vapour trails in the sky and yes world governments are experimenting with geo engineering. But the question of chemtrails still hangs in the air.

So while I can’t imagine losing much sleep over chemtrails, it’s maybe not a bad idea to think twice when gazing at cloud formations in the Costa del Sol skies.

Because while it’s all too easy to dismiss chemtrails as a wacky conspiracy theory, until the unexplained is explained, I for one will be keeping an open mind.

True Valencian paella is under threat from global warming, warn scientists in Spain

Heed the news: More needs to be done to protect the environment