POWDER snow crunching beneath your feet, sun warming your face, kamikaze snowboarders flying through the air… nowhere on the Iberian peninsula are perfect skiing conditions such a safe bet as in the Sierra Nevada. Christmas card views, adrenaline-pumping thrills and cloudless skies for catching an out-of-season suntan – the resort sometimes nicknamed the ‘Costa del Ski’ has it all!

Famously, you can ski here in the morning and then head down for a spot of water skiing off the Granada coast (just down the road) in the afternoon.

And fanatics can even ski – in bikinis and swimming costumes, if you fancy it – at Europe’s sunniest ski resort, usually well into May.

The land of ‘sun, ski and sangria’ is incredibly just a two-hour drive from Marbella on the toll road… and an hour and a bit from Malaga.

Despite years of family skiing holidays, neither of us believed that such good quality snow could possibly be found so close to the beaches of the Costa del Sol.

And nothing beats the feeling of turning the last corner on a perilously-twisting mountain road and catching your first glimpse of the white stuff.

It’s a childish thrill that never fails to delight and our weekend away in the Sierra Nevada ticked all our ‘winter wonderland’ boxes.

The highest mountain range in southern Europe, the serrated edges of the peaks – Sierra fittingly also means ‘teeth of a saw’ – cast a spectacular skyline against the sunset as we wound our way towards the ski resort.

Motorists tailgate each other like ducklings hurrying to keep up with their mother, almost appearing nervous of being stranded alone on the steep uphill road or coming to grief on a tight bend with a sheer drop below.

As we crossed spectacular mountain passes panning out into valleys, we were treated to dramatic views down to Granada far below, with its landmark Alhambra Palace and reservoirs glowing in the golden late-afternoon sun.

When driving at dusk, watch out for bovine obstacles; we came dangerously close to taking out a family of cows ambling slowly across the road in search of grass.

The Sierra Nevada has one of the longest ski seasons in the world, kicking off in late November and welcoming visitors for glacier skiing into May. 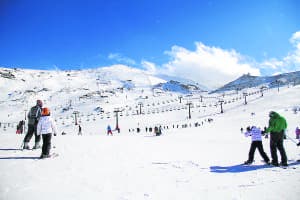 Although early in the season, just 45 km of pistes are open out of a potential 110 km, it is the first resort in Spain… and one of the first in Europe to be properly open and underway.

As well as a significant snowfall at the end of November (just in time for the December 6 ‘puente’), the snow machines work around the clock and a healthy amount of white powder has already set the bar for the coming months.

Although arriving at the resort woefully unprepared for a day on the slope – leggings are no protection from the icy cold – the good people at Surfin’ snowboard shop kitted us out, even loaning us a pair of one of their instructor’s waterproof trousers. We would have liked to borrow his ‘professional ski legs’ too… in more ways than one!

As the rising sun set the snowy peaks aflame the next morning, we were on fire too, anxious to fit in as many runs as possible.

We’d heard a rumour that if you don’t park your car at the lift station before 9am, you haven’t got a chance, but there was still ample parking at lunchtime.

The queues for lift passes and chair lifts were short but if you visit later in the season, or during the school holidays, particularly Semana Santa, Christmas week and Semana Blanca in February, it can get a little congested. Outside of those three weeks you should have no problems.

Thanks to a €3.1 million cash injection from the Andalucian tourist board – which has also contributed three new lifts this season – the price for passes has remained the same for the last four years (€45 for an adult day pass).

Wrestling skis onto lifts while kitted out like Michelin men is an art in itself but finally we made it to the top, two snow queens surveying our kingdom!

Then it was downhill all the way … in a really good way!

The slopes open at the moment are easier blues and greens, heavily dusted with powder snow – ideal for families and those – like us – getting back onto snowboards after a few years’ out.

Risk-takers will be happy to hear that the more challenging red and black runs will be open as the snowfall increases, along with the impressive Sulayr Snowpark which boasts 110 different ramps and rails and the largest ski-jump in Europe.

At night, you will also not be disappointed. As well as a fantastic range of amazing restaurants, which gets better every year, there is some fun nightlife. 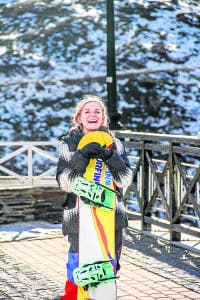 This year, there are some exciting new openings, including the beautiful tapas bar Tito Tapas, a brand new Japanese Jinsei and the hip El Club de la Montana, run by local dynamos Luis and Mayte.

Then there are no less than two new wine bars and even a fabulous new Portuguese cafe. Nothing is standing still.

For a cosy, friendly atmosphere combined with a spectacular array of spirits, head to Bar Ski in the main parade, where owner Sebastian Hollanda Lopez has been a cheerful fixture for the past 28 years.

Like most places in the resort, the ‘free tapa with your drink’ deal offers the perfect opportunity to sample some of chef Paco Martin Ortega’s delicious cooking.

And there’s nothing like a comforting cup of hot chocolate for warming the cockles, on tap at Mama Goye’s chocolate shop.

We returned from our Sierra Nevada sojourn only slightly battered and bruised and positively glowing with festive cheer.

That’s another special characteristic about this sunny winter sports resort. Your snowman won’t melt. Thanks to the resort’s high altitude, you could build one in November and pay it a return visit in the New Year! 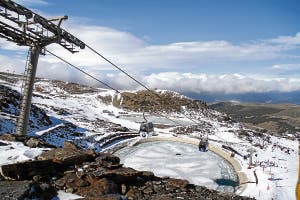 Skiing in Sierra Nevada can also be done in your bikini, see our feature ‘Sun, snow and spray‘.