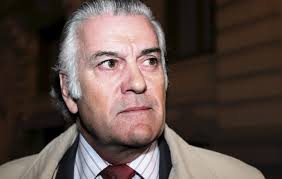 VITAL evidence in the investigation into how computer files were deleted at the PP headquarters just as a corruption scandal erupted has ‘disappeared’.

Incredibly, the judge investigating the wiping of files from former PP treasurer Luis Barcenas’ computer has misplaced the documents.

According to a statement released by the Madrid High Court, ‘the documents have disappeared for reasons that are being investigated’.

The court initially rejected a complaint brought by the opposition in 2013, that accused the PP of covering up illegal party financing by destroying evidence on Barcenas’ computer.

But following an appeal it was decided the case would go ahead.

Now, however, the court is unable to find the original lawsuit documents.

Barcenas – who is separately awaiting trial on charges of money-laundering – has testified to running a slush fund from the PP through which businesses handed cash to party leaders, including Prime Minister Mariano Rajoy.

He added that the computer contained information on cash payments made to party members and illegal party donations from businesses.

But when the police arrived to confiscate Barcenas’ computer after his arrest, it had already been wiped clean.

Madrid High Court has asked those involved to provide new documents to help in the reconstruction of the case.