TO any other mother, not being able to find a nappy for your three-week-old baby anywhere in your village would be a nightmare.

But for Stacie Cottle, who was separated from her newborn after a hospital demanded she take DNA tests to prove the connection, nothing can dampen her spirits now that they have been reunited.

The British mother, 27, could not find an appropriate nappy anywhere in the Axarquia village of Arenas, where the family are currently living, and was forced to travel further afield.

“The only nappies the village shop had were about three times too big for her,” Cottle, a former dental nurse, told the Olive Press.

“It came up to her shoulders and made her so uncomfortable, especially in this heat.”

Nonetheless, Cottle is simply relieved to be back with her baby and three-year-old daughter Anabella, united under one roof for the first time since a doctor at the hospital Comarcal de la Axarquia, in Torre del Mar, told her it was ‘impossible’ that the baby was hers.

Anzelika had been born at the home the very night after moving in. The following day they took the healthy baby to the hospital for a routine check-up, where the nightmare began.

A paediatrician immediately claimed the baby did not in fact belong to her, insisting it had actually been born three to five days previously.

“She said ‘it was impossible’,” Cottle told the Olive Press. “I felt so helpless, I couldn’t believe what they were saying.”

She and her mother promptly left, upset and confused, to return to the new house.

But within an hour police officers were knocking on the door, asking them to return to the hospital for tests.

A second doctor who later performed a medical examination concluded that Cottle had indeed given birth, but, incredibly, not to the baby she brought to the hospital.

The extraordinary case was then handed over to Velez-Malaga courts and the national police, who took DNA tests and placed the baby under the care of social services while waiting on the results.

Meanwhile a distraught Cottle was discharged from the hospital, but refused to leave while her healthy baby remained alone inside.

Bizarrely, she was allowed to breastfeed the child once every three hours under doctor’s supervision.

“I was treated like a criminal, with everyone thinking I stole my own baby,” said Cottle, whose father has a PHD from the University of Oxford.

“This has been extremely hard on my three-year-old, who was not allowed near Anzelika and has been asking for me and the baby, who she hadn’t seen since the day she was born.

“It has been such a confusing time for us, I even brought the placenta to the hospital, which I understand was destroyed.

“They were asking me if I was from Senegal despite the fact we all have British passports,” she added.

Staff at the hospital however denied any possibility the situation was linked to the fact Cottle is mixed race, or that it was related to the area’s problem with immigrants crossing over from Africa.

Eventually, after the Olive Press spoke to the Velez-Malaga court on Cottle’s behalf, she managed to obtain the positive DNA results. That same afternoon she left the hospital with her baby. 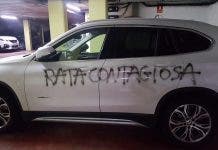